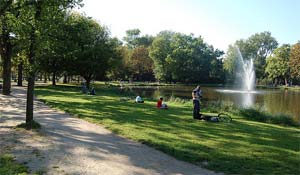 By far Amsterdam’s largest and most famous park, Vondelpark is often compared to New York City’s Central Park. The size and shape are very similar between the two, but Vondelpark isn’t particularly central, although the location is still quite handy for most visitors.

Just as with NYC’s Central Park, Vondelpark has a loop road that zigzags just inside the exterior borders, so it’s ideal for both runners and those who want to pedal their bikes around in a pleasant area without dodging much traffic. The interior is filled with open green areas, forested areas, lakes, many playgrounds, as well as the individual things listed below.

The park was originally opened in 1865 and called New Park, but thanks to a statue of 17th Century Dutch writer Joost van den Vondel placed near the entrance two years later, the public began calling it Vondelpark and later the name was officially changed to match.

Vondelpark is at the extreme southern edge of what is considered the city center, but it’s a very close walk from Leidseplein and even closer to Museumplein, which is where the Rijksmuseum and Van Gogh Museum are located. The northeastern tip (see map below) of the park contains most of the interior attractions and it’s the busiest section, but there are residences all the way around the park so the southwestern tip also gets plenty of use by locals. 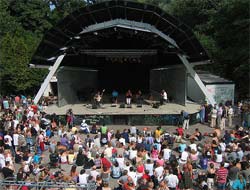 Beginning on June 1 and running through the end of August, the Open Air Theater (Openluchttheater in Dutch) has free concerts and events 5 days per week. Wednesday have youth theater, Thursdays offer traditional music, Fridays feature dancing, Saturdays have youth shows, musical theater, and cabaret, and Sundays offer a mix. The theater is near the northeastern entrance and is easy to find when an event is imminent. There is also a café that serves food and drinks next to the theater. 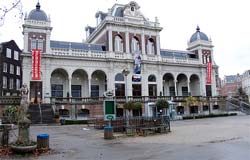 The national museum of film for the Netherlands is also located near the northeastern entrance to Vondelpark. It covers all aspects of film and film-related topics dating back to the late 19th Century, and its mission is to promote the appreciate of film within the country. Tickets are around €7 and it’s open every day.

Hotels and hostels near Vondelpark

This is actually one of the more crowded lodging areas in the city and it’s a good location as long as you don’t need to be really close to an abundance of restaurants or bars. Not surprisingly, the area tends to be quiet, but the Flying Pig Uptown Hostel and the StayOkay Hostel are both very near so there are plenty of young people around. Here’s a map of all the hostels in the Vondelpark area, including several near Leidseplein, which is also close by.

The area just to the west of the northeastern entrance to the park is packed with hotels, many of which are simple 1 and 2-star places that are good for budget travelers.

People definitely do light up in the park, but probably not as often as you might expect. Especially during the day there are always loads of children in Vondelpark and the locals don’t really appreciate tourists who assume the whole city is some kind of weed heaven. If you are not near other people you’ll probably be fine, but this is not some kind of Summer of Love park where anything goes. For more information on this subject see the Where you can smoke and where you can’t section of the Amsterdam Coffeeshops FAQ.

This is fairly common in certain areas when the sun shines. You don’t want to be the only one in a given area doing it, but it’s generally tolerated.

Map of Vondelpark and the area