For more details about weather in Amsterdam throughout the year, check out these posts! 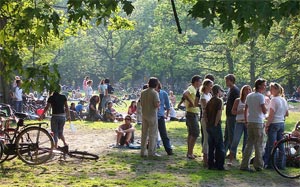 Nobody comes to Amsterdam specifically for the weather, but the good news is the weather won’t keep many people away either. Being just off the coast of the North Sea, the climate tends to be rather mild all year round. The hottest days in summer are rarely what anyone would consider to be unbearable, and the coldest and snowiest days in winter are still a picnic compared to most European cities further inland.

Seasonal summaries (monthly averages are below)

Summer
This is definitely the most popular time to visit Amsterdam and the weather is usually good, but rarely great for more than a couple days at a time. August is the warmest month with an average high of 71 ºF/21 ºC and an average low of 54 ºF/12 ºC. The record high temperature for August is only 93 ºF/ 33 ºC, and humidity usually doesn’t get too high, so there is no reason to fear the hottest days in Amsterdam. In fact, there is more reason to fear gloomy summer days. There is measurable rain almost half the days and often the sun hides behind a cloud cover for days on end. Usually rain only lasts part of the day though, so it’s not likely to ruin your trip. Probably the nicest part of summer is that it stays light out until around 10 p.m. during the peak, so evenings in the park or in the wicker chairs of the grand cafes can be excellent.
Spring/Fall
They are almost identical and are a great time to visit Amsterdam. It’s mot much cooler than Summer and yet crowds and hotel prices are much easier to deal with. The April average high and low are 54 ºF/ 12ºC and 39 ºF/ 4ºC, and it’s actually the driest month of the year by a small margin. Again, it can be gray and a bit rainy, but generally pleasant. The October average high and low are 57 ºF/ 14ºC and 45 ºF/ 7ºC and October and November are the rainiest months, but you’ll rarely have trip-ruining torrential downpours.
Winter
Can actually be very pleasant in Amsterdam. It does snow here occasionally, but rarely more than a dusting, and the sight of a thin layer of snow over the already-gorgeous city is breathtaking. February is the coldest month with average high and lows of 43 ºF/ 6ºC and 32 ºF/ 0ºC. Hotel prices and crowd levels are at their lowest in Winter, and since this is mostly an indoor city anyway your experience isn’t too much different. The days are short, but all the museums and other attractions are open on their normal schedules.
Bottom line
The bottom line is that during summer you’ve got long days and decent weather, but high prices and massive crowds. If you can go during spring or fall you’ll probably be better off since the weather is usually good enough for a city holiday. Winter has the smallest crowds and lowest prices so visiting during this time gets you closer to the locals while saving you money at the same time.