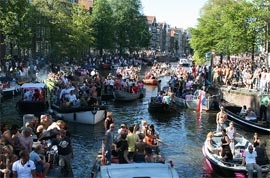 One of the many highlights of August in Amsterdam, and also the biggest week in the gay Amsterdam calendar, Amsterdam’s Pride week takes over parts of the city early in the month and by far the biggest event is the famous Canal Parade. In a city known for its tolerance of nearly everything, it’s no surprise that the parade is not only accepted, but embraced by the whole community.

Courtesy of the official site.

The parade begins at 14:00 (2pm) near the harbor and reaches these other spots at these times shown. Most of the parade is along Prinsengracht, which is the third major canal from the center, and then it turns left into the Amstel River itself. 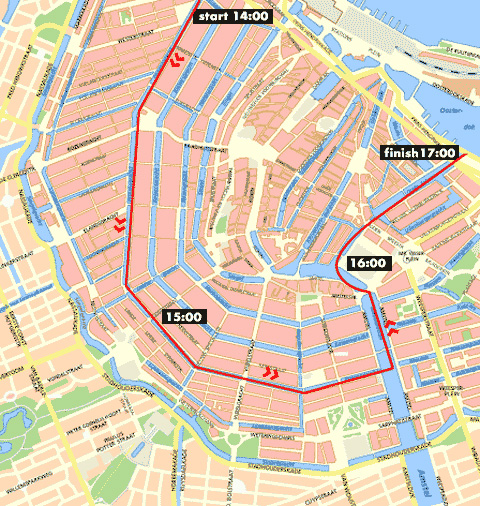 Since it first started in 1995, the Canal Parade has been the highlight of Pride Week in Amsterdam, which always stretches over the first weekend in August. The Pride Week itself fills clubs and other venues for 3 official days plus several warm-up parties on the Thursday night before, and plenty of information is available on the official Amsterdam Gay Pride site. But the Canal Parade itself is popular with most city residents, so even those not interested in the Pride Week festivities should plan on checking out this unusual flotilla.

The Canal Parade consists of over 70 large boats that are each decorated with a theme of some kind, along with scores of smaller watercraft, and of course most of them are on the flamboyant side of things. The route consists of the entire length of the super scenic Prinsengracht, and then into the Amstel River and then back into the Oosterdok, which is just outside Centraal Station. The boats move slowly, so the lead vessel takes about 3 hours from start to finish, and those standing in one place will be there for over an hour to see each of them passing by. There’s a good route map on the Gay Pride site. 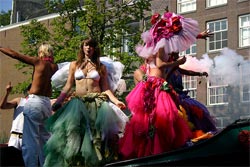 With a route this long it’s fairly easy to get a good place to watch, although the area near the beginning of the parade gets really crowded before it starts, so it’s much easier to find a good vantage point if you go farther along the Prinsengracht, but not all the way down to the Amstel itself. Estimates from 2007 said up to half a million spectators came out to watch. And lest you think this event is nothing but queens watching other queens, in Amsterdam the crowd is overwhelmingly straight, partly because the majority of the more outspoken members of the gay community are on the floats in the parade itself. You’ll find no shortage of men in drag, but also no shortage of girls in bikinis on many of the boats.

If you are anywhere near Prinsengracht as the Canal Parade is going on, it will be hard to miss. Most of the boats have huge sound systems on board, many with a live DJ pumping out house or trance to compete with all the others. Many gay pride events remind us of the classic Onion article about how a Gay-Pride Parade Sets Mainstream Acceptance Of Gays Back 50 Years, but the Amsterdam Canal Parade doesn’t really cross that line.

The Canal Parade in 2009 begins at 2pm on Saturday, August 1, and finishes around 6pm, but if you are early on the route the whole thing will be done in a bit over an hour, so the time the parade passes obviously is quite different depending on where you watch.

Here’s a well produced video that shows many clips from the 2007 Canal Parade. You’ll see that it’s quite a spectacle, but there is quite a mixed crowd involved.