Amsterdam’s 2008 no-smoking law and you 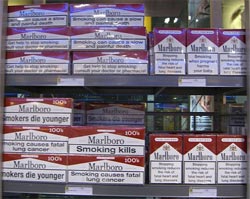 Now that the July 2008 smoking ban has officially begun, it’s time to sort out exactly what it means for visitors who aren’t able to keep up with the specifics on the ground. The July 1, 2008 law is for the entire Netherlands and specifically protects employees from having to work in an area where tobacco is smoked. There had been a voluntary ban by many businesses prior to this, but as of now all businesses must comply. Restaurants and bars were the major holdouts from the voluntary ban, so as of midnight on June 30, 2008, many tobacco enthusiasts symbolically headed outside to begin their new smoking lives.

Update: As of October, 2008, some things have changed regarding Amsterdam coffee shops and the no-smoking law.

As of now, the Netherlands has joined most other large Western nations in banning indoor cigarette smoking in public places. Smokers in every other country before were none too happy about the new laws, but in every case we are aware of they’ve adapted simply by taking occasional cigarette breaks just outside a door. The out-front smokers tend to grumble, but they also tend to bond together in a new social environment. Some places in other countries have adapted even further by opening patio areas out front or even in back, but this option isn’t as viable in the Netherlands and particularly Amsterdam since there just isn’t available space in most places.

The new tobacco-smoking ban doesn’t really change things in hotels because they have been smoke-free in public areas for quite a while already. You won’t be able to smoke in the lobby, and many rooms and entire hotels have been smoke-free for years. This is one place where tobacco and cannabis fall into the same category, so if you are hoping to smoke anything in your hotel room, make sure your Amsterdam hotel allows it. More and more places have become smoke-free, and generally this information will be near the booking information on their websites or other travel-booking sites. If you don’t see any mention of a smoking ban you’ll probably be okay, but be careful because (regardless of what you’ll be smoking) they frown upon people lighting up anyway.

This is the weird and tricky part of the new tobacco ban. Smoking pure cannabis continues to be “tolerated” while smoking tobacco or a mixture of the two is now illegal, even in coffeeshops where the whole point is to go there to smoke. Many non-Europeans are surprised to find that the Dutch and most Europeans always mix their weed or hash with tobacco in a special kind of Euro-joint or spliff. A new movement is afoot toward pure weed in joints, so many Europeans will be discovering why non-Europeans have always preferred straight weed.

Will the shops and customers comply?

That remains to be seen, and everyone is playing a bit of a waiting game. We mustn’t forget that technically speaking, cannabis is illegal in the Netherlands as well, but there is an official “tolerance” program in place where officials have declared they won’t arrest or prosecute anyone as long as they stick to some basic rules (like being at least 18 and selling no more than 5 grams to a person per day etc.). The government has specifically said they don’t plan on using the tobacco ban to target coffeeshops to close down, nor will they target coffeeshops more than bars, restaurants, or any other place where the new ban is in affect.

This might mean that the tolerance policy could now apply to some tobacco use in coffeeshops. Everyone has been put on notice that violations the inspectors witness will incur increasing fine levels, so many shops are going to see how that plays out before changing things drastically. Some larger shops have sectioned off areas where smoking is permitted behind barriers, but most coffeeshops are too small for that and will just carry on waiting to see how inspections go.

One change that has taken place, and seems welcome, is more shops are offering bongs, pipes, and vaporizers for customer use. Most Amsterdam coffee shops had already had bongs for use by customers, even though few people used them. The new tobacco ban has given shops and smokers a new excuse to actually use these things, so don’t be afraid to ask for one if that’s your style or preference.

Most North Americans won’t be bothered by the tobacco ban, but since many Europeans prefer hashish over weed, they are having to adapt to the new environment. Since it’s virtually impossible to smoke a pure-hash joint, many Europeans are switching to pipes and vaporizers for their hash instead of trying the pure-weed joint method.

You can find out more information on the Amsterdam coffee shops FAQ page, which has sections that deal with joints, pipes & vaporizers, and the new no-smoking law itself.