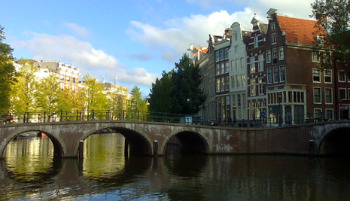 Even if you’re not a bargain-hunting budget traveler, you still have plenty of good reasons to plan a trip to Amsterdam outside the peak summer season. In particular, the fall in Amsterdam is one of the best times to go – the weather is still pleasant, especially in the early autumn, and yet most of the crowds have left. The fact that the prices start to go down after the high season is, in some ways, just a bonus.

Weather in Amsterdam in Autumn

As mentioned, the weather in early fall tends to be pretty much like what it was in the late summer. As you get further into the fall, the temperatures drop off and you’re likely to need a jacket to ward off the cooler evenings. October and November are Amsterdam’s rainiest months, as well, so carry an umbrella with you as you walk from museum to museum. Even in September it’s not out of character for the heavens to open up on a regular basis for brief periods, but it’s rarely enough to warrant more than ducking into a shop for a few minutes.

Be sure to check a current forecast before you leave so you know exactly what to expect and how to pack for your trip.

Cost of Visiting Amsterdam in Autumn

Since summer is the high season, you can expect prices on things like airfare to Amsterdam, Amsterdam hotels, and hostels in Amsterdam to drop after the summer crowds leave. Certainly you’d find even lower prices if you waited until the winter to visit, but if you want to avoid the coldest and wettest weather the fall is an excellent compromise.

Events in Amsterdam in Autumn

September is when the annual Jordaan Festival takes place, as well as the national Open Monument Day. In October there’s the Amsterdam Marathon, the Bock Beer Festival (the country’s largest beer festival), and the Amsterdam Dance Event (the city’s nightclubs are hopping each night of the event). November is home to Museum Night in Amsterdam, the High Times Cannabis Cup, and the start of the holiday season with Saint Nicholas’ arrival.

For more information about travel to Amsterdam in the fall: