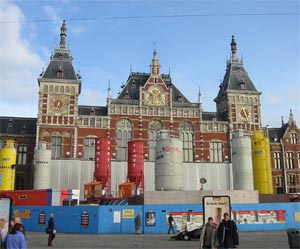 This is part of the 3-part series discussing the main Amsterdam hotel districts so you can quickly decide where you’ll be happiest on your first trip to the city. The other districts have been grouped into the Leidseplein district and the Rembrandtplein area, and both have a lot to offer, but here we’ll be discussing the area around Centraal Station.

From a hotel standpoint, this is a huge area, although you can walk from one end to the other in around 10 minutes. More than half the hotels and hostels in Amsterdam are grouped together in this area, and they range from the cheapest hostel beds in town up to luxurious hotels filled with jewel thieves and James Bond-types.

Within this Centraal Station neighborhood there are two distinctive areas that border one another. If you walk out the doors of the train station and veer a little left (to the east, if you are looking at a map) you’ll soon find yourself in the Red Light District, but if you veer right (west) you’ll be in the heart of Amsterdam’s main shopping area, which is also surrounded by and filled with hotels and a few hostels. Conveniently enough, the temporary location of the modern art museum – called the Stedelijk Museum – is just outside Centraal Station as well, so for now this area also has a bit of high culture.

Red Light District – This is definitely the wildest part of the city, but nowhere near as dangerous as some people might assume. Yes, you’ve got the hookers in the windows in this district, and there are a few sex clubs mixed in as well, but most of the streets in this area have neither of those things. So if you choose to stay in the Red Light District it doesn’t mean you’ll automatically be drowning in the city’s underworld, which is actually in plain view and is harmless in Amsterdam.

In spite of its reputation as a party city, Amsterdam does not generally stay up all night, except for the Red Light District. Most of the rowdiest bars and small clubs are found along these gorgeous streets and canals, and drunken Brits chanting to keep themselves awake are a fairly common sight. Hotels and hostels in this area tend to be well down into the budget end for Amsterdam, but the trade-off might be difficulty getting to sleep unless you choose an interior room, and even then it may not be easy.

The Red Light District is loaded with coffeeshops and late-night food places as well, but it’s not close to many of the main attractions that draw people to this Dutch city. One major drawback of this area is that people often get caught up in the party and forget to venture out to the other areas that are loaded with museums, interesting restaurants, and different vibes that are even cooler than the Red Light District in many ways.

There is an almost-constant police presence in the RLD, but that’s mostly because this is the area where Amsterdam’s few criminals tend to hang out. Pickpockets are not unheard of, so take the usual precautions. The two most likely things you’ll see, especially after dark, are scruffy guys offering to sell you stolen bikes for around €20, and other scruffy guys trying to sell you what they claim are cocaine and heroine. Buying stolen bikes is not cool at all, and the hard drugs they offer are almost always fake. At least your money will go to buying real drugs for their next fix from actual drug dealers. Just walk on by if you see any of this, and you’ll be fine.

The Shopping District – If you veer slightly to the right out of Centraal Station you’ll soon come to Kalverstraat, which is a long pedestrian-only street that runs all the way through Dam Square about a kilometer away. There is a whole maze of alleys in this area as well, and almost all of it is packed with retail shopping, but there are loads of hotels tucked into all different parts of this area too.

Unlike the Red Light District, it doesn’t feel at all edgy or dangerous, and in fact the lights of all the shops make you feel like you are living in a mall, partly because you are. Hotels in this area are slightly more expensive than in the RLD, but many of them are still on the budget end and there are a couple of the most famous hostels in this area as well, namely, the Flying Pig Downtown, and Bob’s Youth Hostel.

The area is generally quite dead at night, but you are only steps away from the Red Light District and also not far from the glamorous Rembrandplein area. You can get the best of both worlds by staying around here, as you are close to nightlife, but actually getting to sleep shouldn’t be a problem. This isn’t a good restaurant area either, but there is no shortage of places around and a 10-minute walk will get you nearly any kind of food you can imagine.

When looking for a hotel or hostel in this area, most of them will boast a location close to both Centraal Station and Dam Square. There are also places well to the west of the Kalverstraat shopping area, and this neighborhood is nice and the nightlife is quite good as well, but going too far in that direction puts you into a bit of a dead zone.

Reasons to stay in the Centraal Station area: