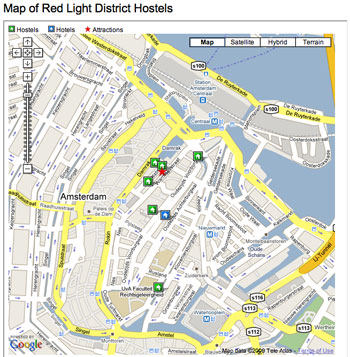 In case you aren’t aware of it yet, this city is crawling with hostels. There are probably more than 50 real hostels with dorm beds just in the city center alone, so finding the best one for your trip can be challenging. In many other cities of this size you’ll get to choose between a couple famous hostels and a few you’ve never heard of, but here it’s way more complicated.

We are trying to make this process easier so we are compiling special articles that each cover an area or theme, so you can pick from a much smaller group that are all places that meet your criteria. Each of these articles has a map on it and you can move your mouse over the hostels to see their name and how much each one costs. Below the map you’ll find reviews of each place that will give you the specific information on the location or theme you are interested in, so don’t skip that helpful feature. We’ll keep expanding this list with new articles, and we’ll keep this page updated to make things easy on you.

Even though tourism in Amsterdam is off a bit, the hostels have never been busier. Especially if you are coming on a weekend or anytime during summer, you are likely to find the better places fully booked if you just walk in the door.

The quality of hostels varies from wonderful to dreadful, even among places on the same block. Interestingly, most of the famous places (like the Flying Pig hostels or St. Christophers) are also the nicest, so you should really lock in your reservation as soon as you know your dates, in order to not get shut out and have to settle for a terrible place in the end.

You generally only need to put down a 10% deposit to hold your bed or private room, which means you are probably only going to have to spend €2 or €3 per person to lock in the best hostel, and even if your plans change you are barely out anything.

Locations and themes of Amsterdam hostels

Cheapest Amsterdam hostels – If you are staying in a hostel at all there is a good chance you are on a low budget, so this list of the absolute cheapest hostels in the city should be helpful. You’ll also be happy to know that most of the best and most famous hostels are on this list, since they have cheap beds at least during the off season, so being a cheapo will actually get you one of the coolest places in this particular case. If you are a budget traveler you should also check out our Cheap Amsterdam Guide for tips on cheap drinks, cheap shopping, and free things to do.

Smoke-friendly Amsterdam hostels – Have you heard about the Amsterdam coffee shops by any chance? Or maybe you are a cigarette smoker who doesn’t like to shuffle outside every time the urge hits. This article will tell you all the smoke-friendly places and where and how you can smoke in each of them.

Amsterdam Party hostels – You might assume that every hostel in this city would be a “party hostel” but that’s not true at all. The vast majority of them are really quiet and mellow, and they discourage drinking or smoking anywhere near the place. But there are a number of notorious party hostels where these behaviors are encouraged, or at least tolerated. Don’t just assume your place will be a riot unless it’s on this list.

Best Amsterdam hostels for stag parties and groups – If you are part of a group of 4 or more people and you are traveling on a budget, some of the hostels don’t want you. Stag parties (especially Brits) have gained a bad reputation in some ways, and several hostels explicitly ban those groups, but the places on this list will welcome you (as long as you behave yourselves). Some of them are party hostels and others are very mellow, so read the reviews at the bottom to make sure you are booking at the right place.

Hostels near Centraal Station – The main train station here is more or less the hub of the city center, and there are many different hostels within a 10-minute walk or so. If you have an early train journey out of here, or an early flight (the train is the best way to get to the airport by far), then choosing one of these hostels close to the station could be a good idea.

Red Light District hostels – The main Red Light District is just across from Centraal Station, so many of the places mentioned in that article are also on this list, but there are also quite a few different ones. This is sort of the crazy party area, and there are a number of good reasons to stay here. This is where you’ll find the greatest density of coffeeshops, but there are also loads of pubs and clubs and restaurants and cheap fast food as well. If your budget is higher or you hate the idea of sharing a room with strangers, check out the cheap hotels in the Red Light District, with nice places starting at €40 per night per room.

Hostels near Vondelpark – If you don’t need to stay close to the train station or in the RLD, this is an excellent area to base yourself in. It’s very near the amazing Leidseplein nightlife and restaurant district, plus most of the famous museums, not to mention the great Vondelpark itself. A couple of the best hostels in the city are in this area, so this is a solid choice if you are still trying to decide.