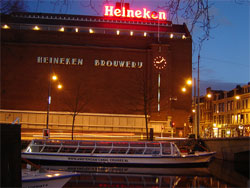 In late October 2007, Heineken gave almost no notice when they closed their iconic Amsterdam attraction known as the Heineken Experience for yet another renovation. At the time they announced they would reopen in June 2008 after a major upgrade that would also greatly increase the daily capacity. While corporations tend to do things like this more quickly and efficiently than governments do, they always seem to be overly optimistic anyway, and now the word on the official Heineken Experience website says the brewery tour/multimedia circus will open in “Summer 2008.”

Update: In late July 2008 it was announced that the Heineken Experience will officially reopen on October 20, 2008.

So don’t hold your breath if you are visiting Amsterdam in June, and July might be wishful thinking as well, but there’s no way to know for sure since they haven’t made an official announcement. Just for comparison’s sake, the nearby and spectacular Rijksmuseum closed most of its main display areas in December 2003 for a major renovation that was scheduled to last until 2008. A few years later the completion date had slipped to 2010, and in 2007 the date was revised again to “year’s end 2012/2013” although it appears that some of the main areas may reopen before total completion.

The old Heineken Brewery stopped churning out the delicious amber nectar in 1988, and in 1991 it reopened as a simple brewery tour and corporate showcase. The tours during the 90s cost almost nothing, and famously ended with a timed all-you-can-drink session in their beer hall. Sadly, that version closed in the late 90s and was reopened in 2001 as the “Heineken Experience.” It was now a self-guided tour with a high admission price that included 3 small glasses of beer at the end, but it was also much more slick and still quite enjoyable.

The future version of the Heineken Experience sounds quite a bit like the most recent version, with the addition of an extra floor to increase daily capacity yet again. While we wait for “Summer 2008” we will have to be satisfied with a couple of new “sneak preview” digital images from their site, which I’ve included below. I, for one, am really looking forward to the reopening, and I assume that in 8 to 10 months a company like Heineken can really make something cool even cooler, but we shall see. 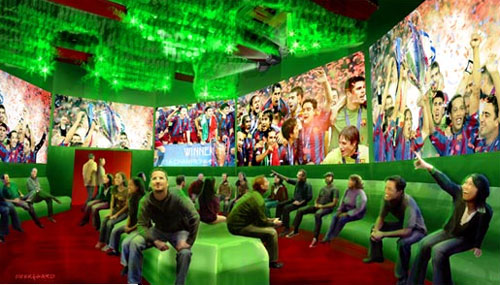 Viewing this image above you’ll notice scenes of FC Barcelona winning what might be the 2006 Champions League finals against Arsenal. But forget that for a second and have a look at whatever it is that’s hanging on the ceiling. I can’t tell what it is, but I can tell that I’m going to stop off at a coffeeshop before I pay to find out. 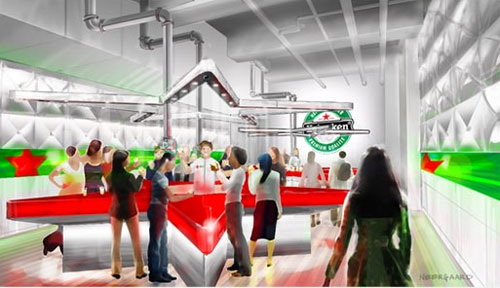 This area might be their futuristic beer tasting room with a beertender standing in the center of a star-shaped bar, serving humanistic-looking androids with not one fat American in sight.