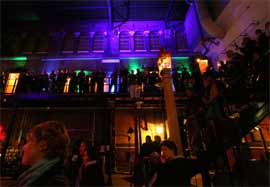 It’s known locally as Museumnacht, and this annual event that lights up the first Saturday night in November definitely is aimed mostly at locals, but if you are lucky enough to be in town at the time you’d be a fool to not participate. Over 40 museums (including all the major ones) open their doors for a special evening from 7pm to 2am, and each is the setting of a theme party of some kind, with some of the larger ones being amazingly elaborate.

The Amsterdam museums typically also plan intricate lighting design for the evening, giving each of them something of a surreal feeling compared to their normal stately appearance. The evening kicks off with a large concert, and special after parties fill up several local clubs and hot spots. Each museum sets up some kind of party atmosphere, often with DJs or even live music, and food is available at many of them. Most of the popular museums get incredibly jammed as the night goes on, so if you have a special one in mind it’s wise to go early so you can see everything there before the chaos starts. 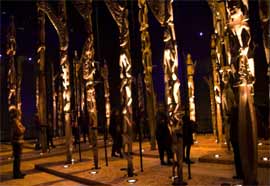 Tickets for Museum Night in Amsterdam

All the main museums and parties are accessible by purchasing one ticket, which is made even more of a bargain by the fact that public transportation is included with this pass from 6pm that evening until 6am the following morning. Tickets go on sale in early October and you can buy them online through the ticketservice.nl website, and also from the usual ticket sellers in the city. The number of tickets for the night is limited, although a complete sell out doesn’t seem to happen until the event itself, so any advance ticket is a good idea. Online tickets stop sales 9 days before, and phone sales stop 3 days prior.

Special bonus: Since it’s obviously impossible to make it to more than a handful of the museums on the night itself, it’s nice that the organizers have arranged that each Museum Night ticket is also valid for entry to one of the participating museums at any time for the rest of the year. Since several of the top museums cost €10 for entry as it is, this makes these tickets impossible to resist, even if you are just in town for the weekend and you will go to one more museum the following day.

Most of the programs and other communications for the night are all in Dutch only, but the local Amsterdam Weekly newspaper helpfully prints a special English-language guide the week before the event. You can find that free paper at most tourist spots throughout the city, or you can download it free on your computer.

Where to buy tickets

You can get advanced tickets from all the major ticket outlets in the country, which includes the post offices, tourist offices, and transport ticket offices. Just ask a local and you’ll find you will be close to one of those.

Tickets for the event are NOT sold at individual museums even on the night, but before and during the event they are sold at the following locations:

The event is almost certain to sell out before the 10pm cut off for tickets, so buying them in advance is wise, or at least early in the evening.

The official Museum Night site is in Dutch, but as the event draws near they add a summary of all the main information on a separate English-language page.