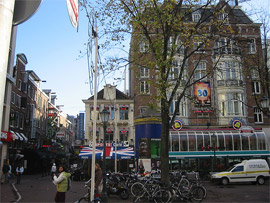 By the time November rolls around, Amsterdam is more or less in winter mode, with very mild weather and noticeably smaller crowds. There are a few really good events during the month, though they are several weeks apart and generally appeal to quite different crowds. Since Amsterdam is really more of an indoor city than most, this can actually be an excellent time for a visit. The weather is still bearable, and flights and hotels are definitely more affordable than just a month or two earlier.

Museum Night in Amsterdam – First Saturday in November
This city has more than its fair share of great museums, and a fun way to see inside some of the ones you’ve otherwise missed is to participate in the annual Museum Night. From 7pm to 2am, about 40 of Amsterdam’s museums and galleries all decorate themselves and throw a theme party of one kind or another. One ticket gets you into all of them, and this event is very popular with locals so it’s best to start early to insure you get into the ones that interest you most. Tickets go on sale in mid October at the usual ticket offices throughout the city. It’s €15 in advance and €17.50 on the day. Museum Night is November 7 in 2009.
>>more information on Museum Night in Amsterdam

Saint Nicholas’ arrival – Sunday in the middle of November
The holiday season kicks off early in the Netherlands, as Sinterklaas (Saint Nicholas/Santa Claus) arrives by boat to Amsterdam harbor, just as you’d expect him to. Then there’s a parade involving hundreds of “Black Peter” sidekicks, followed by a ceremony where the mayor welcomes him back to town. The main and traditional Christmas holiday in Amsterdam takes place on December 5, although lately the December 25 version is also a big event as well. More information on these traditions can be found on the December in Amsterdam page. The Sinterklaas Parade is on November 15 in 2009.

High Times Cannabis Cup – Five days ending on American Thanksgiving Day
The biggest single event on the calendar for the stoner crowd, this draws hardcore potheads (mostly from the USA and Canada) to sort of a cross between a cannabis trade show, and a citywide celebration of high quality weed and hash. You can buy a judges pass, which gets you into the trade show part and also the ceremonies and concerts, as well as allowing you to try all the competing strains of weed for free at the participating coffeeshops in Amsterdam. It can be a lot of fun if you are part of that crowd, though being a judge is really not a bargain, weed-wise. The 2009 dates are from November 22 – 26.
>>more information on the Cannabis Cup in Amsterdam

As you can see by the temperatures below, it’s pretty chilly already in November in Amsterdam, and it rains a bit as well. The rain here tends to be a half-day drizzle instead of downpours that you have to run to shelter from. So as long as you have appropriate clothes you can usually just go about your sightseeing.

The chances of snow, even in late November, are very small, and even when it does snow it would be a light dusting (which actually looks amazing for half a day anyway). So bring layers and some kind of waterproof jacket and you’ll be fine.

Flights to Amsterdam tend to get relatively cheap in November, but are still a bit more expensive than the cheapest period, which is mid January through mid March. Fare sales for this period don’t usually start until at least September, so you probably don’t want to buy a ticket too early. Flights from other parts of Europe tend not to vary in price as much as those from North America, and it’s usually best to buy your ticket as early as possible if you are only coming from within this region.

During November the city finally enters its “off season” so Amsterdam hotel prices throughout the city tend to be cheaper. Not long ago, most small and medium size hotels had fixed prices for rooms depending on the month, but lately most of them are using modern load-balancing systems, so rooms on less popular days are cheaper than those remaining rooms on busy weekends. In other words, it’s best to book your hotel as early as possible, because prices tend to only go up the longer you wait. Prices on hostels in Amsterdam tend to be on their low-season rates in November, and they don’t go up and down like hotel prices, so booking later is fine, and only a few places will sell out during the month anyway. If you are coming for Cannabis Cup it’s a good idea to book in advance though.