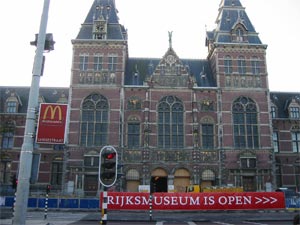 Sad news this week for Amsterdam museum-goers as the city announced that the Rijksmuseum, which was most recently scheduled to reopen after a renovation in 2010, now won’t complete the massive overhaul until late 2012 or early 2013. The country’s most impressive “State Museum” has been mostly closed to the public since 2003, so now it appears that the upgrade will be a 10-year project even if things stay on this new schedule.

The reason given by the Dutch culture ministry is that the company that won the deal to do the improvements for €134 million now says it will cost €222 million. So the ministry has responded by putting the contract up for bids again. The Dutch are almost as notorious for their efficiency as the Germans, but it does make the casual observer wonder what has been happening for the last 5 years.

These delays and cost overruns seem to be the norm rather than the exception around the world, but this one is particularly disappointing because the Rijksmuseum is one of the finest museums in Europe when taken as a whole, and an entire decade’s worth of visitors will have missed the complete experience. Sure, most of the major works, including Rembrandt’s The Night Watch, continue to be on display in the much-smaller temporary wing display called “The Masterpieces,” but the current version is sort of like a career greatest hits collection for an artist that had 10 great albums. 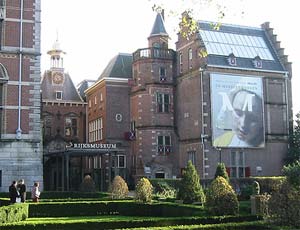 The museum said that in 2006 more than a million people visited the Masterpieces temporary collection, which is about the same number that had visited when the entire museum was open. It’s good that the Rijksmuseum remains popular, but this is still really disappointing news.

My usual recommendation for first-time visitors is that if you are only going to make time for one of the major museums, and unless you are sure you are a Van Gogh fan, then the Rijksmuseum is a much better choice than the Van Gogh Museum. I still think that same advice is true during the renovation, but it’s not nearly as lopsided as it was and will be when the new version is complete.

Something not everyone knows about the Rijksmuseum is that they have a small and free branch located within Amsterdam’s Schiphol Airport. It’s a pale substitute for the real thing, but it comes in particularly handy for the many people each day who are scheduled for a long layover in Amsterdam.

Now let’s hope the Heineken Experience will reopen on schedule in June. Something tells me that a for-profit corporation is much less likely to drag their project on for half a generation.