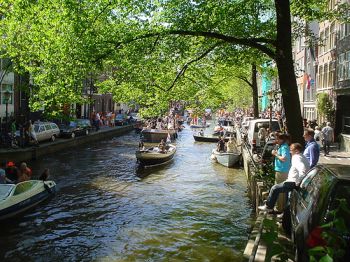 Travelers in the know will go out of their way to avoid visiting popular places during their high season. In Amsterdam, that high season is summer – as it is throughout most of Europe – and it’s when the prices on everything visitors spend money on are at their highest, and when crowds are at their thickest.

So how do you avoid those travel pitfalls without getting stuck in a January snowstorm? You visit in one of the shoulder seasons, of course.

Here’s what you need to know about going to Amsterdam in the spring.

Weather in Amsterdam in Spring

If that doesn’t sound particularly warm or dry, keep in mind that Amsterdam summers aren’t exactly scorchers. Additionally, with so many of the city’s main attractions being indoor-oriented, it’s not hard to fill any time when the weather might be a bit cooler or more damp than you’d consider ideal. And if you’re lucky and the weather’s fine the whole time you’re there, then that bike ride through the park will be that much more lovely.

Cost of Visiting Amsterdam in Spring

As mentioned, summer visits to Amsterdam are going to be the most expensive when it comes to any Amsterdam trip. And while a spring trip won’t be the cheapest one you could organize, it will be one of the best times to get that ideal combination of nice-enough weather and low-enough prices. In a shoulder season like spring, the prices aren’t as low as they can be in the winter, but they’re lower than they are in the summer. Crowds aren’t as thin as they are in the winter, but there are far fewer people than there are in the summer. It’s that perfect storm, if you will.

If you time your trip so you’re visiting in the early spring, you’ll be more likely to be able to score on a super cheap flight to Amsterdam. Later in the spring, airfare will go up steadily but will still be cheaper than a summer flight. The prices on accommodation will be mid-range in the spring, so that both hotels in Amsterdam and hostels in Amsterdam have more affordable rates than in the summer.

Keep in mind that there are some holidays in the spring around which prices will spike – this is especially true of accommodation, as airfare tends to remain steady, but right around Easter and Queen’s Day don’t be surprised if you find it’s a little harder to find a vacant room and when you do they’re a little more expensive than you’d anticipated for April and May.

Events in Amsterdam in Spring

In March there’s an annual religious procession that may or may not make sense to you if you’re not Catholic or Dutch, but could be interesting nonetheless. In April the calendar is a little more crowded with things like National Museum Weekend (free or reduced admission to state-run museums), Easter (a time when many Dutch people travel for the weekend), and the biggest national holiday of all – Queen’s Day. In May there’s another national holiday, Liberation Day, which is also a big deal in Amsterdam but not nearly as big as Queen’s Day. Other May holidays include National Windmill Day and National Cycling Day.

For more information about travel to Amsterdam in Spring: