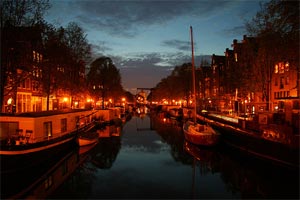 Every large city has at least one neighborhood that was on the brink of collapse a few decades ago that is now trendy and super expensive. The Jordaan is Amsterdam’s entry into that gentrification derby. This mostly-residential neighborhood was one of the poorest and most run down in the city as recently as the 1970s, but now it’s clean, safe, and very expensive for new buyers and renters.

Many guidebook writers go on endlessly on how charming and lovely the Jordaan neighborhood is, but it actually takes some careful observation to see what any of this fuss is about. The reality is that on the surface it looks like most other neighborhoods in Amsterdam. Much of it was built in the early 17th Century, but that’s true of much of the entire city.

There are no major tourist destinations in the Jordaan, although the edge of the neighborhood is just across the Prinsengracht from the Anne Frank House. However, the area is well worth a few hours if you are spending at least 3 days in the city. A big part of its charm actually lies in the fact that there are no major tourist destinations in this neighborhood, which is part of a city filled with them.

For many centuries, this once-poor area has been home to many of Amsterdam’s most famous artists, and that tradition continues today. The narrow streets have a mix of businesses at ground level, and many of these are small art galleries. They are spread through the neighborhood, and you won’t have any trouble finding some along your strolls through the area. Modern art is often the specialty, but all kinds and media are represented.

Since this is a trendy residential area away from most of the tourists, the Jordaan has quite a different feel in its restaurants and bars. Everyone has the ability to speak English, and many of the menus are translated into English as well, but you won’t hear much of it in this neighborhood. This is one of the areas where locals come to get away from the tourists, so this section of town is filled with small and chic restaurants, bistros, cafes, wine bars, and the like.

Since places are almost all so small, it’s best to just wander through the area to look at the menus posted in front yourself. You’ll find something you like that isn’t too empty or too crowded if you keep your eyes peeled. The bars are the same way. Most are very small and patronized mostly by locals only, although tourists are certainly welcome if they are respectful. The .5 liter beer glasses that the tourist area bars have just for the tourists are hard to find in the Jordaan. Instead you’ll see locals drinking from their .25 liter glasses exclusively, which, mixed with good service, means your beer is always cold.

Just find the Jordaan on your Amsterdam map (it’s south west of the city center, bordering on Prinsengracht) and go for a leisurely afternoon stroll. There isn’t any key route to take, although most of the galleries and restaurants are on the larger streets near the center as opposed to the perimeter. If you get to the area about an hour before you might want dinner, you can see all the galleries and other quaint shops as you go, and then pick out a dining spot from the many you’ll pass.

After dinner have a drink or two in any one of the many small bars and brown cafes in the area. In many ways it feels far from the Amsterdam you left just a few hours before, even though you are still only 10 or 15 minutes from Dam Square on foot.

Map of the Jordaan neighborhood

Below is a satellite map of the Jordaan neighborhood. For a better idea of how this fits into the city center check out the main Amsterdam map page and you’ll see the Jordaan labeled over on the left side.