What to eat in Amsterdam 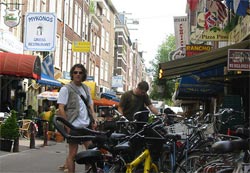 Those who are Amsterdam-bound for the first time often wonder what types of food the city is known for and what they should try that isn’t common elsewhere. This isn’t a major foodie destination, but there are still a few things you should definitely seek out. Fortunately most of them are fairly cheap and easy to find, so those looking for places to eat in Amsterdam should have plenty from which to choose without breaking the bank.

What local specialties should I try?

Oddly enough, there are virtually no ‘local Amsterdam’ foods that you’ll find here or that you should go out of your way to get. The closest thing to a local specialty is actually Indonesian food, due to the “close ties” the countries enjoyed for a few centuries.

There are descriptions of what you should look for while in Amsterdam below, and here’s a little video overview of some of the things you should try while in the city:

There are many Indonesian restaurants throughout the city, and nearly all of them specialize in a dish called Rijsttafel, which is actually a Dutch combination of Indonesian-inspired dishes, served in an awe-inspiring personal buffet style at your table. It’s not cheap, but definitely worth a bit of a splurge. If your budget or appetite is lacking a bit you can order a few of the items a la carte and sample a smaller version of the same idea.
>>more information on rijsttafel 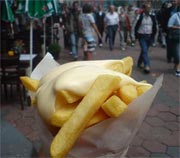 Food anthropologists credit the origins of French fries to Belgium just to the south of the Netherlands, and in fact here they are called Vlaamse Frites, which translates to Flemish Fries, referring to the Dutch-speaking part of Belgium. Whatever the origins, they are very popular in Amsterdam, and often famously served with mayonnaise on top, along with many other interesting topping choices, including ketchup. You’ve got to try them at least once, and you’ll probably be hooked like everyone else.
>>more information on French fries in Amsterdam

There’s no way the Dutch invented pancakes independent of everyone else, as variations of these things can be found in nearly every corner of the world. But still, pancakes are special here, partly due to the fact that they are served both sweet and savory, and usually not for breakfast. There are a few good pancake restaurants in the city center and are worth checking out.
>>more information on pancakes in Amsterdam

This is an unusual fast food chain of automats that sell hamburgers, shakes, hot dogs, and (mediocre) French fries, but mostly they are known for the krokets that stare back at you through small windows, just waiting for you to insert enough coins. Some scoff at these mysterious deep-fried meat-filled treats, but these places are usually busy, especially late at night, and they have many fans. You’ll pass at least a few of these places, and they are worth trying at least once.
>>more information on FEBO

This again is more of a regional food, as herring is popular throughout Northern Europe. Locals do love them though, and the best place to try them is at one of the little take-away stands found throughout the city center, often on the crest of a bridge, for some reason. They serve them raw or cooked, with or without onions or other compliments, and either on a roll or alone so you can dangle them into your piehole like a trained seal. Most tourists won’t touch them, but adventurous people might find a new favorite.

It’s hard to figure out exactly why, but there are many of these places throughout the city center. If you’ve ever been to Argentina you know that beef there can be almost a religious experience due to the way they raise their cattle and the way it’s prepared. The Argentinean steak houses in Amsterdam can come close on the unique two-stage cooking method, but unfortunately the quality of beef isn’t even close, at least not in a price range that makes sense. These can be fun places to try as long as you don’t get your hopes too high.

Just like almost every other city on planet earth, Amsterdam has more pizza places than you can shake a stick at. You’ll find some places that sell whole large pies or individual slices of those as take-away. The quality tends to be average, which is just fine for the many drunks who buy these things to eat while staggering down the street. You’ll also find may sit-down Italian restaurants that do the traditional Naples-style thin-crust individual pizzas meant as exactly one meal for one person. Many of these places can be very good, and plenty of them in the tourist zones start around €6 for their basic pie.

This is another worldwide staple, it seems, and at least Amsterdam has many Middle Eastern expats living here making sure quality is relatively high. You’ll mostly see this in the form of fast food shops all over the city. There is a big chain of vegetarian falafel shops that also make good French fries, and there are also plenty of small places that do gyros, doner kebabs and the like. These are a good and cheap option for those stumbling out of one of the Amsterdam coffee shops.

There is a modest Chinatown along Zeedijk street on your way to the Nieuwmarkt area, which is just past the Red Light District if you are walking from Centraal Station. The many restaurants here might be slightly better than the many Chinese restaurants scattered throughout the city, but probably nothing much better or different from the places where you live (unless you actually live in China, in which case it’s definitely different). There are also plenty of other choices including Japanese, Indonesian, Malaysian, and Vietnamese, so this is really more of a Pan-East-Asiatown rather than just a Chinatown.