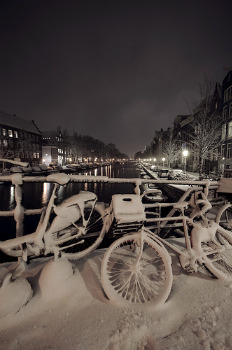 Travelers who appreciate a bargain but aren’t willing to sacrifice too much in terms of weather tend to book their trips during what’s called “shoulder seasons” – the 1-3 months between the high season and the low season when the weather is still decent but the prices are lower and the crowds are smaller. In Amsterdam, those shoulder seasons are the spring and fall.

But if saving even more money on your trip, then prepare for slightly colder weather and book your trip to Amsterdam in the winter.

Winter weather in Amsterdam doesn’t tend to be as cold as you might imagine, and the city rarely gets more than a light covering of snow a few times during the winter. And when so many of the major attractions are indoors anyway, it’s not as disappointing to see rain or snow in the forecast. And really, the cheap tickets you can get during the winter are so appealing you may be willing to deal with whatever Amsterdam throws at you.

Weather in Amsterdam in Winter

As mentioned, winter in Amsterdam isn’t as bad as one would think. In December, average highs are 44°F/6°C, and in January it dips to 41°F/5°C. Lows are typically in the 32-34°F (1-2°C) range. February tends to be Amsterdam’s coldest month, when the average high is 42°F/5°C but lows average at 32°F/0°C. December and January tend to get more precipitation on average – 2-3 inches per month.

Sometimes the wind coming off the cold water on the canals can make the temperature seem colder than it really is, and if it’s snowing or raining when it’s windy then that’s another reason to skip the canal-side stroll and opt for a warm meal someplace cozy instead.

Clearly, you’ll need a sweater and a jacket for a winter trip to Amsterdam, and you might need an umbrella, too. But you’re unlikely to spend much time outdoors so it’s just for the walks from museum to museum to coffeeshop when you’ll need to get all bundled up.

Note that winter days have fewer hours of daylight (as is the case in many other places), with the sun working roughly the hours of 9-5.

Cost of Visiting Amsterdam in Winter

A winter trip to Amsterdam can save you quite a bit on travel expenses. Not only are flights to Amsterdam cheaper in the winter months – sometimes less than half what you’d pay during the summer – the prices on Amsterdam hotels and Amsterdam hostels are drastically reduced as well.

Despite the fact that Christmas isn’t as much of a big deal in Amsterdam as it can be elsewhere in Europe – like Christmas in Rome or the Christmas markets in Germany, for instance – there are holiday traditions that start in early December and run through New Year’s. You may note a slight rise in the prices on accommodation over the holidays (especially New Year’s), but otherwise December-February are probably the cheapest months in which to visit Amsterdam.

Events in Amsterdam in Winter

In December, the holiday festivities are fun (and definitely different), and there are a couple of public ice skating rinks that the city constructs (starting in December) for the winter months. New Year’s is a fun celebration in Amsterdam, followed by Amsterdam’s own Fashion Week in late January. There aren’t any big holidays or events in February, but if you’re interested in attending the opera, ballet, or a concert while you’re in the city those are all up and running throughout Amsterdam’s coldest month.

For more information about travel to Amsterdam in the winter: