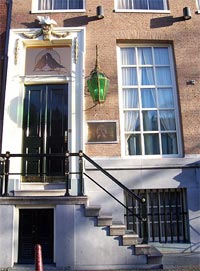 Amsterdam’s drive to clean up the Red Light District took another move forward this week as a Dutch judge upheld the city’s earlier complaint alleging that the infamous sex club called Yab Yum at 295 Singel had been taken over by the Hell’s Angels.

The BBC story on Yab Yum’s imminent demise doesn’t say when the doors will shut, but other sources say it must close on Monday, January 7, 2008. The owners plan on appealing this ruling, but that verdict won’t come until February, according to an Amsterdam city spokesperson.

Yab Yum, which translates to ‘father mother’ in Tibetan, has been Amsterdam’s most famous upscale sex club for many years, where patrons pay €75 just to enter, and then quite a bit more if the patron wants to do more than stand around in the bar. Sex clubs in Amsterdam are similar to Amsterdam brothels, but they differ in that brothels are more private and don’t have public bar or lounge areas where clients can mingle with the prostitutes. The price of sex started at €300, but guests were also encouraged to purchase outrageously priced bottles of champagne in addition. The girls inside were said to be some of the most beautiful and expensive prostitutes in Amsterdam, many of whom worked only part-time at Yab Yum while holding normal day jobs at the same time. As of press time, Yab Yum’s official website is still operating, although the main page contains a rebuttal of the charges (in Dutch).

It sounds like this ruling is only speeding up the inevitable anyway, as the city has already revoked dozens of permits from area sex businesses it accused of being linked to organized crime, and a huge sweeping plan announced just last month set out a path toward cleansing the Red Light District of most of the prostitution and related businesses.

Yab Yum isn’t actually located in the Red Light District anyway. It’s a bit less than a kilometer away on the picturesque Singel canal, and all sex-related businesses in that area are marked for closing, according to Amsterdam’s ambitious 10-year-plan to remake the center of the city.

A small section of the Red Light District will remain, including the window prostitutes themselves, but well over half of it is planned to be scrubbed up and turned into an “upscale shopping” area. Prostitution itself remains legal in the Netherlands, as it is in many other European countries, and there are no plans yet announced to force a major cutback on the city’s famous coffeeshops, although rules on these establishments have continued to become more strict in the past years, and the number of them continues to go down.