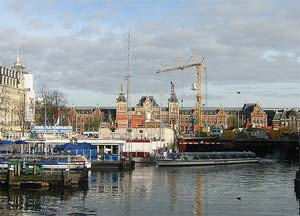 As the first month of the year when you can expect reasonably pleasant weather most every day, April can be a great time to visit Amsterdam for people who like to avoid crowds without having to worry about bringing a parka. The year’s events calendar begins to pick up steam, and the blossoming of the local tulips is in full swing in April.

National Museum Weekend – Each April over 500 of the countries museums offer free or discounted entry and also run special programs meant to draw locals into these fine institutions. The official website is only in Dutch so it’s hard to sort out exactly who’s doing what, but it appears that all the museums in Amsterdam will participate one way or another. The 2009 weekend runs in early April, with dates yet to be confirmed.

Easter – In 2009 Easter is celebrated on April 12. Obviously there will be church services, and Good Friday and Easter Monday are days off for most of the country. Most offices are closed at least one of those days, so this is a big travel weekend for the Dutch, but in Amsterdam nearly all the tourist-oriented shops, restaurants, and coffeeshops will be open their normal schedules.

Queen’s Day – April 30 – This national holiday is one of the biggest parties of the year as Amsterdam fills up with tourists and residents of nearby areas alike. Many people dress in the national color of orange as they celebrate the day through. A citywide flea market pops up on every street, and all major squares and parks fill with stages and events. Vondelpark is dedicated to the kids, and alcohol is abundant nearly everywhere in the city on this one special day. It’s Thursday, April 30 in 2009. When April 30 falls on a Sunday it’s shifted to the Saturday April 29.

The April Amsterdam weather is usually quite nice. You’ll still need a jacket and maybe some layers, but you won’t need to worry about snow in April, and you probably can leave that umbrella at home as well. April is actually Amsterdam’s driest month on average, although obviously it can still come down on you a bit if you get unlucky. The daytime highs are usually warm enough that wind whipping off the water won’t cause much harm, and a medium coat with a sweater/jumper will usually do the trick at night.

Getting to Amsterdam in April

Flights to Amsterdam from North America reach their tipping point, price-wise, in April. If you buy in advance you can often get rock-bottom winter prices during the first half of the month, but for the second half you’ll usually have to pay the spring prices, which can be a couple hundred dollars higher. Starting from Europe prices don’t go up as dramatically, but obviously demand is starting to go way up so good deals are harder to find, especially if you wait until the last minute. The city totally fills up for Queen’s Day at the end of the month, so try to avoid that time unless that’s precisely why you are coming.

Again, through the first part of the month you can get great deals at many hotels in Amsterdam, and most Amsterdam hostels don’t adjust their prices up until late in the month either. April is your last chance of the year to find really good deals, but fortunately prices tend not to go up too much during summer on hotels in the city.