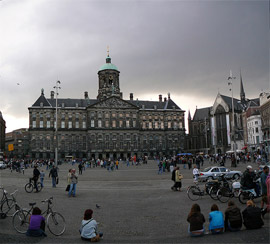 Locals usually just call it “The Dam”, which can be confusing at first, but Dam Square is undoubtedly the true center of the city from a historical perspective, as well as from the social perspective. Located about 700 meters south of Centraal Station, this large rectangular concrete square is famous and usually crowded, although for most visitors it’s mostly just something you’ll be walking through several times during your stay.

The name comes from that fact that a few hundred years ago, the Amstel River used to come all the way to this part of the city, where it was stopped with a dam. The river now stops several hundred meters from here, and there is no sign of any water or dam anymore, at least not directly at the Square. Interestingly enough, this is the only one that locals usually call a “square” instead of a “plein”, which is the Dutch word for square or plaza. All the other famous “squares”, Leidseplein, Rembrantplein, Museumplein, and a few others are usually referred to as “pleins” on all maps and by tourists and locals alike.

What to expect in Dam Square 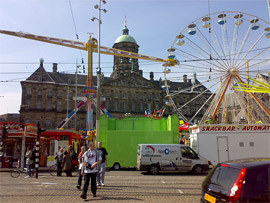 The best comparisons for its role in the city are probably to Times Square in New York or Piccadilly Circus in London, although at this point there is no neon or oversized billboards. It’s just that Dam Square is really the commercial heart of the city, and a place that everyone marches through on a regular basis, but it’s not really much of an attraction unto itself. In fact, the busiest car-traffic street in the city center divides the square in half, which contributes to the sometimes-chaotic ambience.

There are very frequent mini-carnivals set up in the Dam, especially during the summer months, and when those are happening the area can be worthwhile going out of your way to reach, but aside from that Dam Square is mainly just a passage that happens to have a few really nice photo opportunities mixed in.

About hotels in Dam Square

There are several high-end hotels that face Dam Square, and quite a few more that are just a block or two off the square, but for most people there are better areas in which to stay. You can look at our advice on choosing where to stay in Amsterdam for the longer version, but the short version is that three main areas (Centraal Station, Rembrandtplein, and Leidseplein) are worth considering and one of those is probably right for you.

Many Amsterdam hotels will boast about being close to Dam Square, and all those that do are certainly centrally located so you can’t really go too wrong, but on the other hand this is probably the least charming neighborhood in the city center. Again, it’s basically the commercial center, and the square itself is all concrete with tons of foot, bike, and car traffic at all hours, so it really doesn’t feel as much like a neighborhood as it does like a busy outdoor mall. Staying near the Dam means being walking distance from just about everything, and that’s a big plus, but the area is a bit sterile and you might be happier elsewhere. There are quite a few good hostels near Dam Square, though none are right on the square, so each is located in an interesting pocket of the city just a few blocks away in different directions.

Attractions in or near Dam Square

Royal Palace
This 17th Century giant dominates one side of the Dam, and it makes for some really nice photos. It was once the city hall, and is now owned by the government as an official royal palace to be used by the Queen for official functions. It’s usually open to the public for guided tours, though it’s closed during any periods when official business is going on. 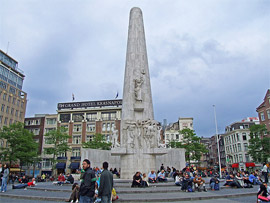 This obelisk-like statue stands in the center of the east side of the square. Even though it looks far older, it was only erected in 1956 to commemorate victims of World War II. It’s a nice photo, and a good place to meet your friends near, but pretty uninspiring otherwise.

Nieuwe Kerk
The “new church” as the name translates to, is ironically one of the oldest things in the city. Originally built in the 15th Century, it nearly burned down in the 17th Century and was rebuilt in its current gothic style. It’s now used for royal coronations and occasional performances, but no longer for services.

De Bijenkorf department store
Facing the northern end of the west side of the square you’ll find the flagship store in a chain of upscale Dutch department stores. It’s notable among locals as perhaps the nicest large store in the country, but for most tourists the inside will remind you of dozens of other stores you’ve seen in your hometown and elsewhere.

Madam Tussaud’s Wax Museum
Just on a northern corner of Dam Square sits a busy tourist attraction that many people find dubious, in spite of its popularity. It’s not cheap to visit at about €20 for adults, and there is usually a line to get in. Lifelike wax figures of international celebrities have plenty of fans, and the Amsterdam branch has many of the same stars you’ll see in other Madam Tussaud’s locations, as well as a few exclusives such as Anne Frank, Mark Knopfler, and DJ Tiesto. You can buy a combo ticket including the Amsterdam Dungeon, which is another nearby new attraction owned by the same people.

Shopping streets
Dam Square is where Nieuwendijk street turns into Kalverstraat, which probably doesn’t mean anything to you, but for Amsterdam shopping those comprise one long pedestrian-only retail artery that is a pleasant tourist attraction for people watching even if you aren’t in the mood to buy anything. Combined together these streets run almost the whole way from Centraal Station to Rembrantplein, so they are hard to miss even if you are trying to.

Red Light District
Amsterdam’s Red Light District starts only a few blocks from Dam Square, and is just across the main street from Centraal Station itself. It’s definitely worth a visit for pretty much everyone, and lately the city has reclaimed some of the shady parts for trendy new shops, so it’s an even more interesting mix than before.

See the main map of Amsterdam page to see where this fits into the city.