Free things to do in Amsterdam 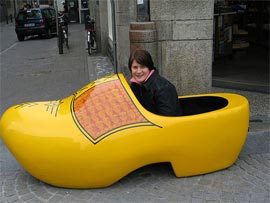 Amsterdam isn’t as expensive as many major European cities, but it can still wipe out many budget travelers who don’t plan well. If you find yourself low on cash and you want to do something other than sit in your hostel room, you’ve got quite a few options. Several of these are pretty obvious and things you’d want to do whether you had plenty of money or not, so just to give you some ideas of some fun and interesting things you can do for free, we’ve compiled a list.

Stroll through the Red Light District

Many travelers are intimidated by the notion of wandering through the world’s most notorious prostitution district, but they really shouldn’t be. This is also the oldest, most historic, and possibly most beautiful neighborhood in Amsterdam, so wandering through the Red Light District is mandatory on any trip. There are a few smaller alleys with a thin road stretching along a big group of red-lit windows with flirtatious girls behind them.

Strolling down those alleys can feel pretty hardcore, but they are quite easy to avoid if you don’t want to join the never-ending herd of men and women who wander through the area. The architecture and canals in this district are stunning, and especially visiting during the day is not even a little weird. You’ll see.

Check out the big street markets 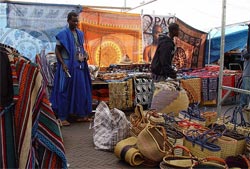 The other major one is the Albertcuyp Market, which is much larger although it’s actually quite hard to find until you know where to look. It’s in the colorful De Pijp neighborhood, just behind the Heineken Experience, and this is where local Amsterdammers go to buy clothes, food, and household items at big discounts. It’s not nearly as quirky as the Waterlooplein Market, and if you only have time for one I’d recommend the other one, but if you are in the area it’s sure to be entertaining and you’ll be able to learn a lot about the day-to-day life of the locals and probably see a couple of free street performances in the center area. 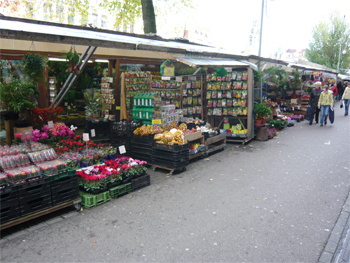 You’ll probably do this by accident at some point anyway, because this famous open-air flower market is right in the middle of the city center, and easy to spot from a distance. This is a full block along the Singel Canal that is lined with shops that sell flowers, bulbs, seeds, and even dodgy cannabis starter kits.
>>more information on the Flower market in Amsterdam

Walk through the Jordaan neighborhood

This is another thing you’ll want to do whether you have money or not. Plenty of people rave about this bohemian neighborhood just across from the Anne Frank House, but when you first get there it’s hard to see what the fuss is about. Really, it’s just a quiet district that happens to be filled with small art galleries, bars, shops, and restaurants. In the past few decades the Jordaan neighborhood has gone from a run-down working class area to the trendiest address in town. Check it out near the top left of the main Amsterdam Map, and just plan to stroll around for a while taking some photos. There isn’t really one thing in particular to see, but most people really do like it.

Check out the big town squares for free performances 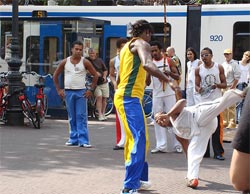 There are really three major squares (pleins) in the city center, and each is usually hosting at least one or two things that can be observed for free. Dam Square is where you’ll find the Royal Palace and City Hall, and there is frequently a carnival of some sort, and always crowds of tourists and locals as well.

Rembrandtplein is a bit further out, and especially in the evenings it’s jammed with party people and occasionally street performances. Leidseplein is the farthest out (you can find them all on the main Amsterdam Map page) and there are almost always street performers trying to earn money from the large crowds that gather around them. The whole Leidseplein area is amazing even with no performances, and sadly many people who come just to enjoy the Amsterdam coffee shops don’t even make it this far from Centraal Station during a weekend visit.

Again, this is something you should probably do anyway, but being broke is a great excuse to check out the city’s playground of Vondelpark. Especially in summer it’s always jammed with people sunbathing and goofing around. There are free concerts at the Open Air Theater from Wednesdays through Sundays in June, July, and August. It’s mostly family-oriented stuff, so don’t expect to be blown away, but still interesting and free.

Take a free ferry ride across the river 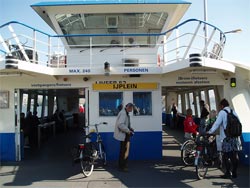 This one isn’t really for everybody, but if your pockets are empty you’ll be happy to know that you can ride the ferry from behind Centraal Station across the Het IJ (pronounced Het Eye) for free. There are three different routes from the docks just behind the train station, and two of them just head across the river and a bit east, while the third takes quite a nice journey north and west, giving you an interesting view of the industrial parts of the harbor area.

You can just stay on and come right back, or you can do what probably fewer than 1% of visitors do and actually check out the northern part of Amsterdam. If you take the Ijplein ferry you’ll end up in an interesting upcoming neighborhood that is actually well worth a stroll. Here’s a map of the ferry lines courtesy of the local transit authority.
>>more information on the free ferry ride across the Het IJ

A special note to stoner-types

By the way, if you are the adventurous type and you’ve still got around €5 left then you might want to try a space cake from one of the coffeeshops, which will make everything on this list about ten times more entertaining.