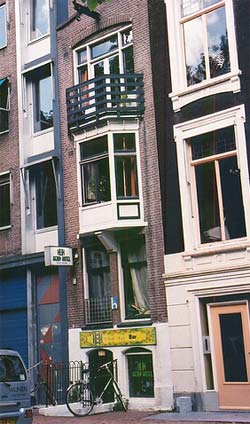 Where else in the world could there be a Hemp Hotel? I can actually think of a few places, but there is one in Amsterdam, which makes more sense than just about anywhere. Specific details on this place are hard to come by, and don’t expect much help on the official Hemp Hotel website, which probably won some kind of web design award in 1996 or so.

To deepen the mystery, I must have passed by this place many dozens of times without even realizing it when I was living overlooking the Albert Cuyp Street Market, not far from the Heineken Brewery. It’s just down a quiet street off Fredriksplein, which is a nice area but not terribly close to any major tourist attractions aside from the two I just mentioned.

Needless to say, the hotel itself promotes the whole hemp culture, which often parallels but isn’t identical to marijuana culture. Many in the “hemp culture” seem convinced that a good chunk of the world’s problems could be solved if non-THC hemp were a legal crop, but those claims seem to be sketchy at best and fraudulent at worst. But the novelty value of this place still seems like it would be worth going a bit out of your way for, if only for one night. I’m sure as hell going to check it out when I’m back in Amsterdam next.

Nearly every hotel in Amsterdam comes with a complimentary breakfast, and at the Hemp Hotel that means fresh hemp rolls and muffins along with orange juice, coffee, or tea. You’ll also be using hemp soaps, shampoos, and sheets during your stay, which evidently are available for purchase as well.

Room rates and how to book

The Hemp Hotel currently only has 5 rooms, which probably helps to explain their low profile on hotel-booking sites. A double room is €75 with a private shower, €70 with a shared shower, or €60 for a single. There’s no obvious way to book a room on their website, and I’ve never seen this place on any major booking site, but there is an e-mail address and a phone number on their site so I assume that’s the way to go.

Reviews from previous guests seem to be either glowing or disappointed in the facilities and the cleanliness. The rates are quite low and if you’ve stayed at other budget hotels in Amsterdam you know to expect a small room and rickety furniture, so I think it’s important to adjust your expectations and realize this isn’t the Hemp Hilton.

If you don’t want to stay in this slightly-lonely part of Amsterdam, you might consider swinging by for a drink or 3 instead. The Hemple Temple Nightbar opens at 4 p.m. each day, and closes at 3 a.m. most nights but 4 a.m. on Friday and Saturday nights. Night bars in Amsterdam are the only ones that can stay open that late, and there is usually only one or two in each neighborhood. This one features 11 kinds of hemp beers as well as wines, ciders, and non-alcoholic beverages. The place also claims to be a restaurant, but their site gives no additional details.

The official site does give good directions to get there at the bottom of the main page, so at least cruising by should be simple enough, especially if you are combining it with a trip to the aforementioned Albert Cuyp street market. Many hotels in Amsterdam discourage their guests from sparking up in their rooms, but something tells me it would be okay in this place. Just a hunch.

Below is a map of the Hemp Hotel location. For a labeled map of the city see the Amsterdam map page.