Houseboats in Amsterdam can be ideal for a group 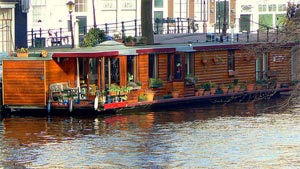 If you’ve yet to visit Amsterdam, there are a few things about booking accommodation here that you may not be aware of. First off, Amsterdam hotels tend to have really small rooms, especially on the budget end of things. If you have traveled elsewhere in Europe before this won’t be nearly as surprising, but for those who mostly have experience in North America, it can be shocking when you first open the door to your budget hotel room to find the whole thing only two to three times the size of a bed that also seems smaller than you expected.

If you are shopping for a 3-star or above hotel you’ll likely be choosing between places that were built more recently, and the rooms will be a bit larger, although you’ll be paying a minimum of €100 or so, and the area will still be too cramped for socializing among more than the people who are staying in the room.

If you are coming with a bunch of friends or several couples, you’ll probably have a much better time if you look into one of the larger rooms at an Amsterdam hostel. You won’t have much privacy, but you can usually reserve a whole room for 4, 6, or 8 people for yourselves. It’ll be much cheaper than a bunch of tiny hotel rooms, and much easier to socialize as well. 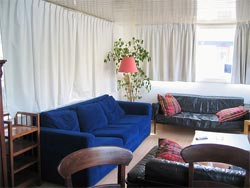 But if you are looking for something a bit more stylish, you might be pleased to know that quite a few companies rent houseboats in Amsterdam, and these can be an incredible set up for groups of between 4 and 8 people. The prices of the houseboats might seem a bit high at first, but these things are more like larger apartments or hotel suites than hotel rooms, so you really get a lot for your money in most cases. Most of the rental boats have one or two bedrooms, and most of them also have sleeper-sofas, so it’s easy to get four people in even the smaller ones.

Perhaps best of all, on these houseboats you’ll usually have one neighbor at most, and often you’ll be renting the entire boat so you can make a lot of noise if you choose and no one will hear you, much less complain about it. Another great benefit of renting a houseboat is you will usually be just steps away from a corner store, so if someone needs more beer or cigarettes you can be back with them in a minute or two. In most hotels you’ll still be inching down the ladder-like staircase toward the front door a few minutes after you leave the room.

Check out the main Amsterdam houseboats page for more information and also links to sites that rent the boats. This information is also on that page, but one very important thing to consider is location. Cheaper houseboats will often be located well outside the city center, and renting one of those boats might actually ruin the social aspect of your trip rather than enhance it. The best advice is to find one in a convenient and central location, and pay a bit more for the privilege if you have to.