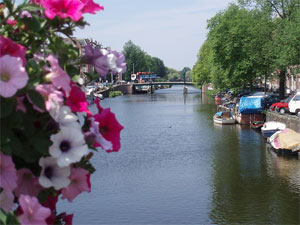 To the surprise of absolutely no one, June is the first month of the year when Amsterdam is totally packed with tourists. Many locals begin their beach holidays either at the local shores or on distant patches of sand, but the massive influx of backpackers more than makes up for their absence so you can expect a month of high hotel prices combined with long lines for most all attractions. There are only a couple of notable events in June, but that’s just as well since there is never a shortage of interesting things to do in this city and having more festivals would only make crowds even more unbearable.

Holland Festival – most of June – The country’s largest arts and culture event takes place every June in venues throughout Amsterdam. Started in 1947, the Holland Festival has long been a showcase for international talent in opera, dance, music, and theater, and starting in 2005 they added a series of events called Fuel. These Fuel events are more contemporary displays of visual arts, concerts, debates and lectures. The 2009 dates are June 4 through June 28, and much more information can be found on the official Holland Festival website, which is all translated into English if you click on the Union Jack on the main page.

Canal Gardens in Bloom – 3rd full weekend in June – As beautiful as Amsterdam is, there aren’t many public gardens mixed in the with lovely canals and classic buildings, but on one weekend in June about 25 secret gardens have an open house. Most of these are in or near the city center, and various tours including a free canal boat are arranged so the public can see the lovely gardens as summer begins. The 2009 dates are June 19-21 and more information can be found on the Holland.com site.

Amsterdam weather throughout the year is milder than most people expect. Winters rarely get bone chilling and summers rarely get very hot. You can see that you’ll still need to bring a jacket or sweater in June, but with a little luck you’ll only need it in the evenings. Don’t expect t-shirt, shorts, and sandals weather any time of the year here, and you may need an umbrella more than any of those things, although day-ruining downpours are rare. As usual, dress in layers because wild temperature swings are possible.

Getting to Amsterdam in June

Airfare to Amsterdam from North America is at its peak from June through the end of August and fare sales are rare. Your best hope is buying as early as possible, but aside from that there are really no tricks. If you are coming from elsewhere in Europe it’s still possible to get a cheap flight if you book early, but again, when demand is at its peak the airlines don’t need to cut prices so you just have to bite the bullet.

Starting at the beginning of May at the latest every hotel and hostel in Amsterdam is at their peak price for the year. Many hostels will be sold out most days of the month, so in that case it’s important to book early just to be sure to get a bed. For hotels, most of them have fixed prices for each room during the month, but in the case of some business hotels or other international chains you can sometimes get better prices by booking early. If you wait until the last minute you can occasionally get good deals at business hotels that have empty rooms, but it’s hit or miss. There are a few hotel-booking agencies inside shops along Damrak just in front of Centraal Station, and they do sometimes have good last-minute prices available, but other times you’ll have to scramble just to find any bed at any price.