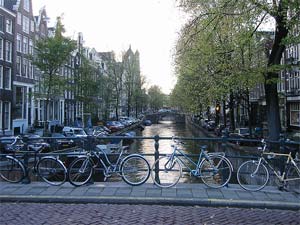 March can be one of the best months of the year to visit Amsterdam. The weather is noticeably warming up, crowds are still quite small, and airfares to the city are still at or near their lowest point of the year. And at least up until Daylight Savings Time starts on the last Sunday of the month, the sun comes up by 7:30 a.m. for the first time since October. There aren’t many events in the city that are of note to visitors, but all the museums and other attractions are open with their normal schedules, so with the small crowds you can see a lot in a short time.

Stille Omgang (Silent Procession) – Each March the Catholic Church organizes this event commemorating the ‘Miracle of Amsterdam’ that took place in 1345. It has to do with a dying man who lived on after last rites were administered, and it’s one of the biggest Catholic events in the country. The procession starts in the Spui area and heads along Kalverstraat to the Centraal Station area, and then back to Spui on Warmeostraat. The 2010 date is March 20 and more information can be found on the Stille Omgang website.

The weather in Amsterdam during winter is more mild than most people imagine. It can snow in Amsterdam during March, but it’s rare. Most of the days will look very much like the averages, but occasional windy periods can make it feel colder. If you dress in layers you should be fine, and an umbrella isn’t a bad idea this time of year, although it’s unlikely to rain buckets or for days at a time. This is an indoor city for the most part, so if you dress appropriately there isn’t a great difference in the overall experience for most people.

Cheap flights to Amsterdam, especially from North America, are usually easy to find. It seems that spring travel really hits the airfares in mid April, so March prices tend to stay at their winter lows. Buying early is the best advice, but even nearing the last minute you can usually get cheap fares if you are flexible with your dates.

Amsterdam hotels also tend to be at their off-season rates through most of the month. Beginning in April, prices can rise by 20% or so for most hotels, so March can be the time to get a good deal.