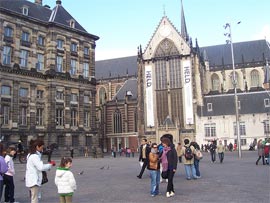 As October rolls in, the summer crowds are long gone and a sense of normalcy returns to the Dutch capital. This is a year-round tourist destination, but from June through early September the city center can be so jammed with visitors that you feel like you are trapped in a theme park at times. By October the main sights are easy enough to see in just a couple days, and the mild weather continues to be conducive to spending time walking around, as long as you don’t mind some light rain now and then.

ING Amsterdam Marathon – Mid October – Since 1975 the city has held a major marathon that has brought in many of the world’s most elite long distance runners. Lately around 25,000 participants have joined in, which hasn’t stopped the Kenyans from dominating the spots on the winners’ podium in the end. Fans of watching a giant and strung-out herd of people running by them might be disappointed to learn that the race mostly avoids the city center. It starts and ends at the Olympic Stadium, which is about 2 kilometers southwest of Leidseplein. The runners do go by the Heineken Experience, Museumplein, and through Vondelpark, so if you want to catch a glimpse head toward those spots. You can get much more information and even register on the official ING Amsterdam Marathon site. The 2009 date is Sunday, October 18.

Amsterdam Dance Event – Mid to late October – This is really two events in one. During the afternoons there is a 3-day conference that brings together most of the important people in the world of dance music together, including many big name DJs and producers. It’s one of the premiere events of its kind in the world, and is best suited for industry professionals. But on those three nights, plus the nights before and after, there is a festival that jams over 40 of Amsterdam’s nightclubs with parties featuring most of the biggest DJs on earth. Those attending the conference get in free to most of the parties, but tickets are available to the general public as well. The parties with the famous DJs tend to sell out early, so you’ll want to plan ahead and buy tickets if you are interested. The 2009 dates are October 21-24, and the parties associated with the festival will go from October 20-25. More information on the Amsterdam Dance Event.

Bokbierfestival (Bock Beer Festival) – Late October – The largest beer festival in the Netherlands happens to celebrate the local variation of bock, which is a brew that is darker and heavier than the lager that dominates most taps in the country. You’ll find more than 50 different seasonal autumn bocks this time of year, made by all the major breweries including Heineken. It tends to be high in alcohol as well, so plan ahead for that. This 3-day festival is held in the former stock exchange building called Beurs van Berlage, at Damrak 277, between Dam Square and Centraal Station. It’s €7 to get in and then €2 for each sample, and there are music performances each evening. The 2009 dates are October 30 through November 1.

October happens to be the wettest month of the year in Amsterdam, but don’t get too bogged down by that fact because rain is fairly consistent here for most of the year, and you’ll rarely be met by drenching storms that will force you indoors for long periods of time.

Especially this time of year, it tends to be gray most of the time, with light showers on and off. A hat and a decent jacket is usually enough to remain comfortable, although bringing a travel umbrella might be worthwhile as well.

Flights to Amsterdam can be found at bargain prices in October, at least compared to the peak summer season. From North America you’ll usually find fare sales starting in August for fall travel, so buying your ticket too early might actually cost you a bit more. From elsewhere in Europe prices are lower than during the summer months, and fare sales are harder to predict.

The high season for Amsterdam hotels used to last into November, so it was hard to find a good deal in October, but in recent years most hotels have switched to computerized load-balancing systems that drop prices when many rooms are available and raise prices as more are reserved. As a result, you can get better deals in October if you book in advance. It’s best to be a bit flexible and search a few hotels to find one that is offering some of their lower prices because the differences can be dramatic. Most of the hostels in Amsterdam continue to have set prices for each month, and October is still high season, but the differences in price between high and low season are minimal, so it’s not worth worrying about.