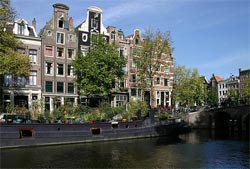 September is a favorite month in Amsterdam for many hardcore fans of the city. The summer weather rarely gets blazing hot, so it’s not a matter of avoiding the steamy days like in the south of Europe. It’s more a matter of far fewer first-time tourists visiting than in August, particularly starting just after Labor Day in the United States (which is always the first Monday in September). So you get the combination of smaller crowds, pleasant weather, and cheaper flights as well. There aren’t any blockbuster festivals like there are in Amsterdam in August, but there are a few worthwhile events you might consider checking out if you’ll be coming anyway.

Open Monumentendag (Open Monument Day)/Heritage Days – This national event takes place on the second weekend in September and provides citizens and visitors a chance to see inside historic monuments and buildings to promote understanding of earlier generations. The movement was started in 1987 and now around 50 countries participate in their own versions. Many buildings in Amsterdam will participate, and the best way to get more information is get a free magazine from the VVV tourist office any time after mid August. Or you can see what’s up on the official Open Monumentendag site. The 2009 dates are September 12 and 13.

Jordaan Festival – The Jordaan neighborhood is probably the trendiest in Amsterdam as it’s gone from working-class slum to filled with art galleries and urban professionals in the past few decades. On the third weekend in September the neighborhood celebrates itself with a festival, and while it should be interesting to outsiders this is really more of a local and traditional party than like the frequent carnivals that are in Dam Square. The 2009 dates are September 18-20 and more information for Dutch speakers can be found on the official festival site.

As mentioned, the weather in Amsterdam tends to be quite mild all summer, and by September it’s usually on the cool side. The highest temperature ever recorded in September is 83°F/28°C and the daily peak will almost always be fairly close to the 64°F/17°C  average.

You can expect fairly frequent drizzle, but rarely major rainstorms. You’ll get a lot of gray days with occasional sprinkles, so you’ll want a jacket with you, but it shouldn’t get cold enough for a heavy coat even by the end of the month.

Prices for flights to Amsterdam generally go down by the second week in September, and often fare sales from North America begin for flights starting on the first, so especially if you avoid the first weekend in the month you should save some money compared to the insanity of summer fares. The same is true for flights from within Europe, although the difference might be less dramatic.

September is still considered high season in Amsterdam hotels, although many who book through computer reservation systems do lower their prices a bit this month as opposed to places that stay on a strict calendar. The hostels in Amsterdam tend to stay close to the same price all year, outside of the winter months anyway, so you won’t be getting a bargain this month, but it should be easier to book a bed at your first choice.