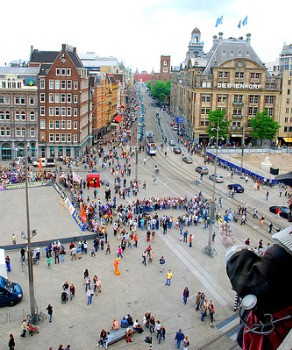 Summer is by far the most popular time to visit Amsterdam, but that’s true of pretty much every European destination. The summer months are when you’ll find the highest concentration of foreign tourists on their European tours, and especially American backpackers on their summer breaks from school. There are, as you might imagine, pluses and minuses to visiting Amsterdam in the summer.

Amsterdam’s weather can be somewhat hard to predict in the spring and fall (Europe’s shoulder seasons), so visiting in the summer means you’ve got a better chance of experiencing nice weather. But with the bigger crowds flooding the city in the summer come higher prices as well, so an Amsterdam trip in the summer can be a costly one.

Certainly if your only available time off is during the summer and you’ve got your heart set on Amsterdam, then you’ll visit in the summer – just be prepared for elevated high season prices and larger crowds or you run the risk of being disappointed with the experience.

Here’s what you need to know about going to Amsterdam in the summer.

Weather in Amsterdam in Summer

As mentioned above, summer in Amsterdam typically means more predictably good weather. The average high temperatures in the summer are 66°F/18°C for June, 69°F/20°C for July, and 71°F/21°C for August – so you can see that even in the warmest month the average temperature isn’t exactly scorching. Of course, there are hot days in Amsterdam where the temperature can get into the upper 80s or even the low 90s (F), but that’s not an everyday occurence.

Not only is it not unbearably hot and humid in Amsterdam in the summer, rain is fairly common in the summer (even if it’s only a little bit). One nice perk about a summer visit is that, because Amsterdam is so far north, it stays light until 9-10pm some nights. Just note that you might need a light sweater as the evening wears on and gets a little cooler.

Cost of Visiting Amsterdam in Summer

The prices on things like accommodation and airfare to Amsterdam go up in its high season, which is the summer. You can sometimes find special deals on flights if you’re diligent about looking for sales in the spring and you’re traveling at the very start or the very end of the summer, but more likely than not you’ll see a significant spike in the cost of a trip in June or July as opposed to March or April.

There are lots of hostels in Amsterdam, which will help you save money on a summertime visit, although many of them raise their rates for the high season (not to mention the fact that they get booked up more quickly in the summer). If you don’t find what you’re looking for with the hostels listings, then look for cheap hotels in Amsterdam and make sure they’re either in the city center or close to public transit.

In particular, if you’re visiting Amsterdam around one of the big summer festivals or events, be sure you’ve got your accommodation sorted well before you arrive as there will be even more people in the city looking for a place to sleep.

Events in Amsterdam in Summer

In June, the Holland Festival takes over most of the month and many of the theatres around the city, with music, dance, and theatre performances. The third weekend of the month is also host to the “Canal Gardens in Bloom” festival, when private gardens are open for public view. In August, there’s the annual Gay Pride Canal Parade, a major event in Amsterdam, and a 17-day fair called De Parade.

For more information about travel to Amsterdam in Summer: