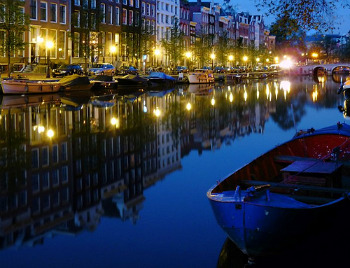 While Amsterdam is a perfectly wonderful choice for a single-destination vacation, it’s also incredibly popular with people who are backpacking with a Eurail pass on more long-term trips through Europe or even as part of their round the world travel plans. It makes sense – despite being a cultured city with world-class museums and historic monuments, Amsterdam’s more dominant reputation (especially among the backpacking set) is that of a city where partying takes precedence over everything else and hedonism is akin to religion.

What young explorer out to see the world doesn’t want some of that action?

The truth, however, is that – like any place – if you focus only on one aspect of Amsterdam’s personality you’re going to miss out. You don’t have to be an art historian to appreciate a trip to the Rijksmuseum or Van Gogh Museum, or a World War II scholar to be moved by a visit to the Anne Frank House. For that matter, you don’t even have to be a beer lover to enjoy a tour at the Heineken Brewery. Sure, our prurient interests will mean that an Amsterdam trip isn’t quite complete without a stroll through the Red Light District and even a stop in an Amsterdam coffeeshop – but there’s so much more to Amsterdam than that.

What’s the moral of the story? Well, even if you planned to live in Amsterdam for a year there would still likely be things in the city you’d miss. But no matter how long your visit to the Dutch capital happens to be, soak up as much travel wisdom from those who have gone before as you possibly can so you don’t miss out on anything critical to your travel happiness.