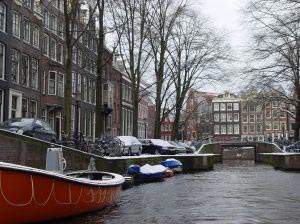 Being a mostly indoor city, Amsterdam pretty much carries on the same as ever during December. Of course you’ll be less tempted to picnic in Vondel Park during winter, and also just wandering around aimlessly loses some of its appeal when the mercury dips, but all the museums and other attractions operate on their normal schedules. The first few weeks of the month offer some of the lowest airfare to Amsterdam of the year, so when you add in the seasonably low hostel and hotel prices, it can make for a quite affordable trip.

And Amsterdam, being a great walking city, has an excellent public transportation system as well, so fear not. If you are coming to Amsterdam in December you’ll feel like you have the city to yourself (except for the end of the month, see below) so the smaller crowds and lower hotel prices can more than make up for the fact that the weather is less than ideal.

The weather in Amsterdam isn’t all that great in the summer, and it doesn’t get too terrible in winter, so the mild climate shouldn’t be a major factor in deciding when to visit. It’s not like you are coming to spend your days playing beach volleyball anyway. Sure, it gets pretty cold in Amsterdam in December, but rarely out of hand. The average high for the month is 44 ºF/6 ºC and the average low is 36 ºF/2 ºC. They have an average of 10 days in December that get below freezing at all, but of course that’s normally just before sunrise.

It does occasionally snow in Amsterdam in December, but that almost always means just a light dusting. If you think the city is attractive in dry weather, just wait until you wake up one morning to see it covered in a thin coat of fresh snow. With the canals in the city and occasional high winds, there can be a nip in the air, but packing gloves and a scarf should keep you warm enough on your way to and from the coffeeshops and bars.

During the winter Amsterdam sets up a couple of public ice rinks in the city. There is a small one open in Leidseplein starting in November, and another one in the nearby Museum Square (between the Rijksmuseum and the Van Gogh Museum) area opens just after Christmas. Skating is free if you’ve got your own skates, or you can rent them there for €4 for 2 hours.

Christmas Eve and Day are not huge deals in Amsterdam. In the Netherlands Sinterklaas arrives with a group of controversial figures named Zwarte Pieten (Black Petes) in mid-November, marking the beginning of the holiday season. Sinterklaas, with the help of the Black Petes, distribute gifts to all good children on December 5, while naughty children can only look forward to coal (although as energy prices rise these naughty children may one day get the last laugh).

After Sinterklaas disappears on December 6, the typically Western Christmas decorations appear, and the shops are still in high gear. Santa Claus, called Kerstman in Dutch, arrives on December 24, and more gifts often appear. Sinterklaas is still the bigger deal, but Santa has made inroads in the past decade or two. The Dutch celebrate two family-oriented days of Christmas on December 25 and 26, with feasts and lots of desserts.
>>more information on Christmas in Amsterdam

The Dutch really don’t do Christmas markets like the Germans do, and there are no notable ones in Amsterdam in December. But the German ones really are mind-blowing if you’ve never been to one. The hundreds of vendors combined with the desserts and delicious mulled wine is something you won’t easily forget. The city of Aachen is just over the southern border in Germany, and can be reached in about 3 hours by train from Amsterdam. If you are visiting for 4 days or more in December a day trip from Amsterdam to the Christmas Market in Aachen can be well worth it.

At the end of December Amsterdam completely fills up with party people. New Years Eve has become a huge event all over the city, and hotels book up way in advance so plan ahead. There are street parties all over the city, but the main event is in Dam Square where fireworks greet the New Year over screams from beer-fueled revelers. The party goes on regardless of the weather, but of course it if happens to be raining then the already-jammed bars throughout the city become even more popular.

Some restaurants take reservations while others continue their first-come/first served policy on New Years Eve, but pretty much all of them close before midnight. Again, New Years Eve in Amsterdam is hard to beat, but it’s best to plan ahead and sort out your options so you don’t find yourself on the outside looking in at the big moment.
>>more information on New Years in Amsterdam