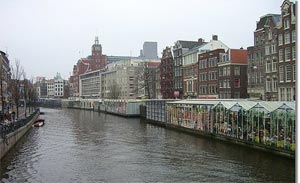 February in Amsterdam is not marked by any special events that would be of special interest to most visitors, although there is obviously a lot still going on. This is mostly an indoor city and all the museums and other attractions are all open, only with smaller crowds than during most of the rest of the year. Many fans of the city like to plan annual pilgrimages during these mellow winter months because prices on many things are lower, and the lack of crowds means visitors can move about freely without having to dodge the slow-moving masses.

Airfare to Amsterdam is at its absolute lowest from early January through early March, so flights are usually both cheap and fairly easy to find, even at convenient times of the day. Of course, once you arrive at Schiphol Airport, you’ll take the train to Centraal Station that leaves many times per hour right below the airport. Even if the weather is not ideal, you won’t even have to bother with it much.

Just as airfare is at its lowest during mid-winter, Amsterdam hotels are also charging their lowest rates of the year as well. Since crowds are small it’s often possible to book a place with a really good location, even on a weekend, and even without much notice. Many rooms stay empty during this time of the year, so it’s a buyer’s market.

Yeah, this is winter, but if you haven’t been here during this time of year the Amsterdam weather is probably not as bad as you imagine. You’ll need a heavy coat or several layers, but you won’t need heavy snow gear or other extreme outfits like you might need in, say, Berlin or Prague. The proximity to the North Sea keeps things fairly mild, although sometimes cold winds can be whipping off the rivers or canals to make it a bit harsh for a while. Snowfall is rare, and when it happens it’s usually only a dusting that doesn’t stay around long. And when Amsterdam is covered in a thin layer of snow it looks even more gorgeous than normal.

Amsterdam is usually best explored on foot, but there are other options. The center is quite compact so most things are typically only a 5 or 10-minute walk from one another if you plan your sightseeing route properly. The longest distance most people ever need to travel is from the train station to the Museum Square area, and that’s about a 30 to 40-minute walk if you are up for it. But if you are in town on a really cold day you will do very well relying on its Amsterdam’s excellent public transportation system. The trams go everywhere, and an all-day or multi-day pass is quite cheap. Taxis can be found at taxi stands in most busy areas of the city, and if there is a small group of you these can sometimes be a decent value in addition to being a fast way to get around.

What to do in February

There are no special events of interest to most visitors during February, but the cultural season is in full swing, so concerts, opera, ballet and so forth are all going. And parties and clubs events are also happening regularly as well, so there is no chance of being bored if you do a bit of research. There is also a free ice-skating rink set up near Museum Square during February, so that could be a bit of fun and you’ll almost certainly be going through that area anyway. Amsterdam’s famous club football/soccer team, Ajax, continues their season in the huge and indoor Amsterdam ArenA, which is only about 20 minutes away on the subway/metro from the city center. And it goes without saying that all the coffeeshops in Amsterdam are open and ready to help relieve whatever stress you might build up on your visit.

More resources for just before you go

In the weeks leading up to your visit you should download a free pdf copy of the Amsterdam Weekly English-language culture and entertainment paper. It lists all the gallery events in addition to all the arts activities in their comprehensive listings section. It also has really good and well-written feature articles so it might help inspire you in other ways as well.

And for information and listings on nightclubs and live music you should check out UnderwaterAmsterdam, which does a great job compiling entertainment events for all tastes.