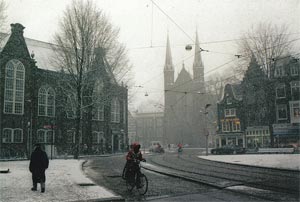 There isn’t much going on in Amsterdam in January, but all the major attractions are open with shorter lines, cheap airfare to Amsterdam is easy to find, hostel and hotel prices are at their lowest of the year, and visiting in the off season can be the best way to really get to know a touristy city like this, since it will mostly be you and the locals this time of the year.

Amsterdam is mostly an indoor city anyway, even as stunning as its views tend to be. There is no shortage of cafes, bars, restaurants, and even coffeeshops that have lovely city views available as you sit cozily inside. And with the smaller crowds come far shorter or non-existent lines for the attractions, so your time outside will mainly just be walking from one place to another, or boarding a tram.

The weather in Amsterdam during winter is not nearly as severe as most other European cities at a similar latitude. It does occasionally snow in Amsterdam, although it’s fairly rare. When it does it’s usually a light dusting and it can be beautiful, but it does make walking around a bit slippery for a while, particularly on some of the bridges. The cold winds blowing off the canals can really get to some people and make it seem colder than the temperature indicates. Dress in layers and bring a hat and gloves and you should be fine.

One thing that can be a bit unsettling is that the sun doesn’t rise until almost 9 a.m. this time of the year, and it’s dark before 5 p.m. as well. Amsterdam is notoriously dead in the mornings anyway, but if you like to go for early morning walks you’ll be doing it with the guidance of streetlamps.

The weather can be unpredictable during January, and it can rain from mild to frozen and windy. If you get unlucky during your visit there is no reason to despair. You’ll be far less motivated to walk around the city, but the excellent public transportation system won’t let you down. Trams usually only run 10 minutes apart, so you can usually hang out in a café or shop until you see yours approaching and dash out to it in plenty of time. The all-day transit passes really come in handy on these frigid days.

For up to the minute events, download the current issue of the Amsterdam Weekly, which is an excellent English-language entertainment paper with complete and detailed listings.