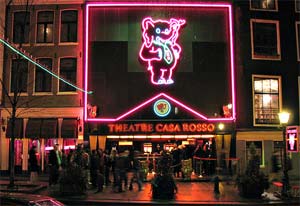 One of the many legends about Amsterdam that some people have trouble believing is that there are theaters where patrons can pay for entrance and then witness actual live couples on stage having sex, as well as quite a few different-but-similar tricks involving bananas, pens, ribbons, vibrators, and whatnot. Just like the legend of Amsterdam’s coffee shops and the Red Light District itself, this one is absolutely true, at least as of now. (Starting in late 2007 the city began cracking down on many sex-related businesses and closing down RLD windows as part of a 10-year plan to clean the area up, so there’s no telling how long the current hands-off situation will carry on.)

Live sex shows are not the same as sex clubs

The sex shows in Amsterdam are based around a bit of audience participation, but for the most part these are spectator sports. If you are looking for a sex club where you can enter a bar and then choose a girl to spend a private hour with, Amsterdam has got you covered. The sex clubs are similar to the brothels, but very different in a few key ways.

There are three of these live-sex theaters/bars in the Red Light District, and each is quite different so deciding which of the three to visit should be pretty easy for most people. And while these live-sex clubs are “shows” they aren’t really the same as strip clubs elsewhere. These places feature things that most people never thought they’d ever see in public (or at least in a dimly-lit big city nightclub), but they aren’t too likely to get visitors worked up to the point where the only practical release is visiting one of the nearby window girls. Nope, most people describe the experience as interesting or hilarious rather than “sexy”, and the group you visit with will probably make all the difference as to whether it’s a screaming laugh or an over-hyped disappointment. If you are just really horny you might just skip this step because prostitute prices in Amsterdam are probably lower than you expect.

The first two places below (which are owned by the same people) list official prices for entrance, but a variety of factors will influence whether or not you can arrange a discount at any of the three of them. At each place you’ll deal with a multi-lingual doorman who is an expert at figuring out just how much money the club can get out of your group. You’ll never have to pay more than the listed price, but if you come when it’s crowded, are in a small group, and seem anxious, there’s almost no way of getting in for less.

The trick, if you want to save a bit of money on the way in, is to go at an off-peak hour (earlier), but then you run the risk of the place being dead and not as fun as it would be if you came at a peak hour. If they aren’t too crowded inside and you seem ready to go to the next club if you don’t get a discount then you’ll have a good shot of either saving some money or getting additional drink tickets (other than at the Bananenbar with its unlimited drinks policy).

Also, if you are in a larger group of, say, 6 or more people, you might be able to get a discount even when they are crowded. It’ll probably be only €5 per person, but it’s worth asking for sure. These places will often let the bride or groom-to-be in for free for stag/hen/bachelor/bachelorette parties as long as that person is dressed up a bit.

At the moment the Bananenbar and the Casa Rosso are offering a special deal for €55 per person that includes admission to Casa Rosso plus one drink, as well as admission to the Banana Bar for one hour and unlimited drinks. You can buy this combo deal at either place. 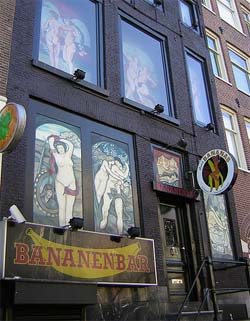 This one is probably the most famous of the three, and it’s not really even a live-sex show per se, since there are no male performers. This is the best place for Amsterdam stag/bachelor parties and groups of drunken men, and probably the worst choice of the 3 for couples, although females and even groups of females are welcome. The Bananenbar is owned by the same people who own Casa Rosso, which is discussed below.

For a fixed admission charge of €45 per person you gain entrance to the Bananenbar for 1 hour, and all drinks are free and included in this steep price. You’ll be handed a glass for either beer or spirits, which will then be filled by the performers/servers in either the upstairs or the downstairs bar area. There are usually 4 girls working on each level, and they tend to be a mix of different looks so most people will find at least a couple of them to their taste.

If you go late in the evening or other times when it’s busy you can sit in the back and not get more involved yourself, but if you want to have a hands-on experience you’ll need to pay more. Each of the girls has sexy parlor tricks they can perform, and one of them will cost your group €20 while you can get them all doing their routine for €50. This is only one of the reasons it’s best to go with a bigger group.

The performances you’ll see close up include baby oil rubbing sessions, a remarkable penmanship demonstration on a postcard where the girl doesn’t need to hold the Sharpie in her hands, vibrators being fired long distances at high speeds – again, with no hands, and of course the famous routines involving the bananas themselves.

After your hour is up your name will be called and you’ll be hustled out of the club before you know what’s hit you, or you can pay more to stay. Most people reckon that one hour is a perfect amount of time because it’s designed that you can see everything once, and the novelty wears off quickly the second time anyway.

Oudezijds Achterburgwal 37
1012 Amsterdam, Netherlands
8pm – 2am daily, until 3am Fri and Sat
€45 for one hour including all drinks
Official Bananenbar/Casa Rosso website 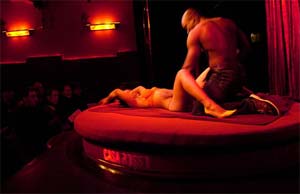 At the top of each hour a series of performances begins, although it’s basically the same each hour so there isn’t much reason to plan on staying all night. They promise couples shows, both male and female striptease shows, a soft S&M show, and a banana show during each hour, but during certain times of the evening you may not get all of them.

There is usually only a couple minutes between acts, and some people are impressed by how choreographed the whole thing is (including the couples sex show parts), but others think it all becomes a bit mechanical when every movement is scripted to that degree.

There will always be calls for audience participation, and bold and drunken audience members can and will end up on the stage, but occasionally when there are no takers in the crowd the show just drops that portion. People seated in the first row run the risk of getting squirted with something, although not as bad as you might think.

Oudezijds Achterburgwal 106-108
1012 Amsterdam, Netherlands
8pm – 2am daily, until 3am Fri and Sat
€30 with no drinks or €45 including drinks
Official Bananenbar/Casa Rosso website 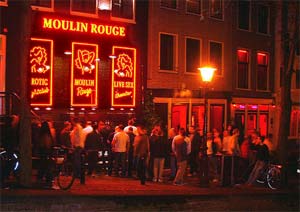 This place is much more similar to Casa Rossa discussed above than to the Bananenbar discussed just above that. It’s a theater, although a bit smaller than Casa Rosso. You usually get 4 to 5 different acts over the course of an hour, and the breaks between acts tend to be longer here than at Casa Rosso.

This place is probably the most popular for female visitors and couples, but of course the stag/bachelor parties often come to this one too.