May in Amsterdam – Events, weather, and travel tips 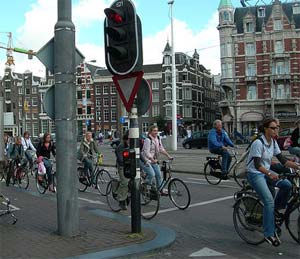 Going to Amsterdam in May is your last chance to avoid the massive summer crowds, and the weather is generally quite pleasant most days, but it can always be cool and gray in Amsterdam during any month so you can never come feeling certain of warm sunshine and blue skies. Since Queen’s Day in Amsterdam is a huge national holiday on April 30, May begins with something of a national hangover, but there are several notable events in the city to look forward to this month as well.

May Events in Amsterdam

Dodenherdenking (Remembrance Day) – May 4 – Everyone who lost their lives in World War II is remembered with a solemn ceremony at Dam Square that begins with the flag taken town to half staff at 6pm and really gets going with 2 minutes of silence at 8pm followed by the national anthem and about an hour of speeches. There are similar ceremonies all over the Netherlands, but this is the major one and is often attended by the royal family.

Bevrijdingsdag (Liberation Day) – May 5 – The quiet events the day before are immediately replaced by this national holiday marking the anniversary of the date in 1945 when the Netherlands was liberated from Nazi occupation. Canadian troops were the first allies to arrive, so Canadian flags are part of the decoration. There are concerts and celebrations throughout the country, including quite a few in Amsterdam itself. The most noted events take place in Museum Square in the southern part of the city center, but there are also performances and celebrations in Leidseplein, Vondelpark, the Rokin street area near Centraal Station among other places. There is also a market similar to, but much smaller than, the one on Queen’s Day. There are also gay and lesbian events in different parts of the city, most notably at the Homomonument. Some shops have limited opening hours or remain closed altogether, but most places of interest to tourists will have normal hours on May 5.

National Windmill Day – Second Saturday in May – The Netherlands has over 1,000 working windmills including 6 in Amsterdam, though none of those are in the city center. On this day more than half of them in the country are open to the public for tours. The date falls on May 9 in 2009.

National Cycling Day – Second Saturday in May – You’ll probably not notice the difference in Amsterdam’s city center itself because it’s jammed with bicycle traffic every day of the year, but this day encourages all the Dutch to ride around on their bikes, and it seems to be working. At least for 2008 and 2009 it falls on the same date as National Windmill Day, so certainly more than a few people will be pedaling out to a windmill or two. You can easily rent a bike and get in on the fun yourself.

May weather in Amsterdam

If you’ve not been here before you should be warned that the weather in Amsterdam is not the reason to come. As you can see above, the temperatures tend to be cool this time of the year, but at least it’s one of the driest months. Any day could be rather cold and it does occasionally warm up to t-shirt and shorts weather in May, but generally it will be mild and layers are recommended.

Getting to Amsterdam in May

Amsterdam flights from North America tend to be near their yearly peak prices by the middle of May. If you book early enough you can often get really good airfare deals, but if you wait until April you’ll probably be looking at nearly the summer prices. From Europe the airfare situation isn’t nearly as dire, but especially with the low-cost airlines it’s best to book as early as possible anyway.

Unfortunately, by the beginning of May pretty much every Amsterdam hotel and hostel has adjusted its prices to the summer peak. The main tourist season here goes from April through October so you can’t really find great hotel deals in May. More hotels are computerizing their reservations process, which means that prices can be lower until they’ve sold out a certain percentage of their rooms for that period. In other words, booking early can actually save you a bit of money at some of the larger places, and cancellation policies in the city usually allow you to bail out with only 2 days to go, so there isn’t much downside.