Prostitute prices in Amsterdam, just in case you were wondering 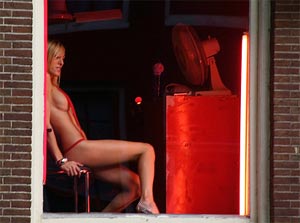 I would imagine that for every 100 men who wander around through Amsterdam’s Red Light District, 99 of them never seriously consider buying what’s being offered in those notorious red-lit windows, but I would also imagine that most of those 99 are at least a little curious about how much things cost once the curtains are drawn. After all, this isn’t called the world’s oldest profession for no reason, and it’s both legal and a tourist attraction in Amsterdam.

There are several different places to see prostitutes in Amsterdam, and the ones in the windows are (sort of) the cheapest and, of course, the easiest to find. Amsterdam also has escort services, brothels, and sex clubs where prostitution is always on the menu. More information on how things work and what things cost can be found on the Amsterdam brothels page and the sex clubs in Amsterdam page.

The girls in the windows – the basic transaction

After quite a bit of research* I can reveal that the basic price for a “fuck and suck” starts at €50 in the Red Light District, but just like new car dealers will tell you, anything extra will drive up the price. For €50 you get about 15-20 minutes so there is no time to mess around. The girl will slip a condom on you as quickly as possible, and then begin the oral sex in order to get you ready for the next step, and these girls know plenty of tricks to help keep things moving along. The next thing you know, you’ll be doing her in one of the more common positions, and then you’ll be headed back out onto the street before you know what hit you.

Things that will cost extra

The commonly quoted base price of €50 doesn’t include anything that isn’t mentioned above. You might be surprised to learn that if you’d like the girl to be completely nude, that may or may not cost extra. Most prostitutes around the world famously don’t kiss on the lips, so if this is something you want you have to inquire before settling on the price, and even then you may be out of luck. And you can certainly spend more time with her than 15 minutes or so, but don’t expect much of a volume discount. The next 15 minutes will probably cost another €50, but a full hour might be yours for around €150 or so.

If you want anything unusual, it’s extremely important to discuss it up front, before she sets a price. The advice from all sources says that as embarrassing as it may seem the first time, it’s mandatory to discuss everything you want to do before you actually strike a deal. If you want to play with her boobs, massage her, have her massage you, see a striptease, or anything else other than the basic transaction described above, you have to ask for it to see if she’ll do it at all, and how much she’ll charge for it. It seems that many of these normal foreplay routines are often included in the basic €50, but all the pros say it’s best to never assume. 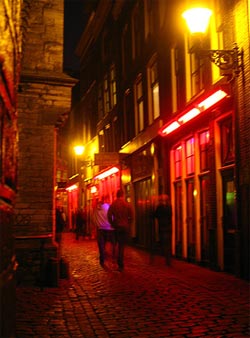 In all the research (see below) I couldn’t find anything that indicated that the super hot girls charge more, which I find hard to believe even though that does seem to be the case. I do know that Amsterdam’s Red Light District could be called a buyer’s market because there is never any shortage of lovely girls smiling and waving at you as you walk by.

And if you are planning your first trip to Amsterdam you are likely to be in for a pleasant surprise. There are a few plain girls and quite a few who might be older, or who seem like they’ve missed their last few scheduled workouts, but these girls obviously have their fans and they must stay busy enough since they each have to rent these rooms for about €100-150 for an 8-hour block. The truly amazing thing is how many stunning girls are working in Amsterdam’s main Red Light District.

From lots of personal journeys through the area I can tell you that MANY of these girls look like Playboy Centerfolds from a distance and most of those still look hot as hell when you get a bit closer. If you are a fan of thin and athletic girls, natural curves in the correct places, or even comically large boob jobs, you’ll find someone who appeals to you behind some of these windows. Most girls are white and European looking, but there are plenty of black and Asian girls, and even a sprinkling of Latinas.

And this is where the “standard price” doesn’t quite compute for me. I think I’d pay €50 to some of these girls for the privilege of carrying their groceries home. And from quite a few trips to different Las Vegas strip clubs (where table dances lasting 3 minutes cost $20) I’ve noticed that the hottest girls get away with more because they know they are one of the hottest girls in the club. I’d have to imagine the same is true in Amsterdam, but I haven’t seen anyone mention that. Perhaps the guys who get hypnotized by these stunning women don’t like to admit they paid double the going rate, but I guess since there are so many from which to choose it really is true that they all charge around the same price.

*There are tons of websites where guys discuss prostitutes they’ve visited in vivid detail, but in order to find the information above you have to sift through mountains of forums and articles that are mostly loaded with far more data about these sexual adventures than most of us care to know about. For further reading on the subject you don’t have to look very hard, but the best site written by and for prostitution fans in Amsterdam is ignatzmice.com.