Amsterdam recommendations for a first-time visitor

I recently got an e-mail question from someone wondering a few things to prepare for their first trip to Amsterdam. One question was to name my top 3 things to see on a first visit to Amsterdam. I think this is a pretty common question for many people, so I thought I’d expand the answer just a bit here. 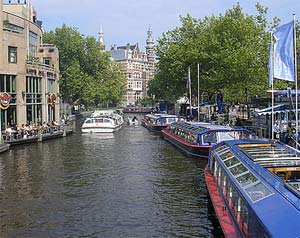 Unlike nearly every other European city (except for its brother-in-canals Venice) Amsterdam has no good city bus tours. It’s not really obvious just from looking at an Amsterdam map, but those streets that go along the canals in the city center are really small in addition to being almost completely residential. That puts half the city off limits to big buses, and the other half is mixed with a few busy streets and a few that are off limits to everything but trams and/or bikes.

The good news is that many different companies offer a similar 1-hour canal tour that is the best way of getting the lay of the land quickly. There are some that do hop-on/hop-off with stops near Leidseplein, Museumplein, the Heineken Brewery, and other attractions, but the quickest way for most people is just walk either straight out of Centraal Station, or just to your right out the door, and you’ll find several companies offering these tours so you can often walk up and be underway just a few minutes later. You can get more information here about the Amsterdam canal cruises. They are also the best first thing to do on a 5+ hour layover at Schiphol, and more information can be found on the Amsterdam Layover Guide.

Pick at least one museum 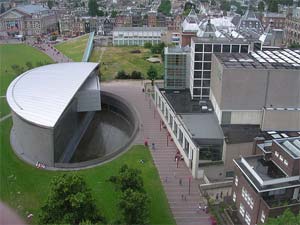 The big two museums are the Rijksmuseum and the Van Gogh Museum, but we’ll throw the Anne Frank House into the mix here as well. One kind of interesting thing is that everyone’s heard of Vincent Van Gogh and the whole ear story, so many people put that one on the top of their list. But name recognition doesn’t make you a fan of the guy’s work. Personally, I’m not really a fan of Van Gogh’s art, and I know I’m not alone. If you aren’t sure you can just check out the sidewalk out front of the place to see what you think of the posters, t-shirts, and postcards being offered by the many vendors there. If nothing blows you away out front, you might also be disappointed inside. The building itself is more interesting on the inside than it is on the outside, but it’s not nearly as cool as the Rijksmuseum across the square from the Van Gogh.

The Rijksmuseum is normally a bit like the Louvre in Paris in that the facility itself is almost as amazing as the art it holds. But the Rijksmuseum is still undergoing a long and delayed renovation, so only a couple hundred major works are on display in a temporary wing until 2012 or so. That puts it on par with the Van Gogh, and I still prefer the Rijksmuseum, but I don’t blame people for choosing the complete Van Gogh while the renovation continues.

Your impression of the Anne Frank House will largely depend on whether you read the book or not. I never have and I never will, partly because I don’t think it’s right reading other people’s diaries, regardless of what their father or my grade school teaches said. The displays inside are explained well, and the whole place is much larger than you probably expect, but if you aren’t a fan of the book the Anne Frank House is really nothing more than a slightly dull checklist attraction with a long line out front.

Pick something really fun too

The Heineken Experience/Brewery is completely closed for yet another major renovation until June 2008, but once it opens again I’m sure I’ll recommend it. The previous two incarnations of the tour there have both been really fun, so version 3.0 is likely to be too, although probably more high-tech and maybe even more expensive.

Unless you are traveling with children every moment of the day you should definitely take a stroll through the infamous Red Light District. It’s one of the most beautiful parts of the city, and now a big chunk of the RLD is on the endangered list so in a few years people will be nostalgic about the current version. Parts of it, but not all of it, do have flirty and bikini-clad girls in the windows, and there are some sex shops and sex shows mixed in too, but there are also thousands of tourists of all kinds there all day. You’ll see when you get there that, except for maybe late at night, it doesn’t feel even close to X-rated.

Amsterdam’s coffee shops are also legendary, and again, visiting doesn’t feel nearly as creepy as you might fear. There are lots of young people in them, but people in their 40s and 50s are fairly common as well. If you are even a little curious, you owe it to yourself to at least check one of them out. You won’t be the only uncertain tourist in there, and the staff are used to people coming in feeling just a bit uneasy. Partly for this exact reason I created the Amsterdam Coffee Shops FAQ, which should answer all of your questions about how the whole scene works in the city.

If you’ve got a question about visiting Amsterdam feel free to e-mail me and I’ll do my best to answer it.