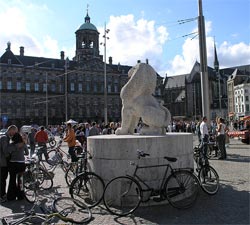 Since a big chunk of Europe itself takes the entire month of August off from their jobs, you should expect crowds during the month in Amsterdam. Some Dutch locals will flee the city this month, but the influx of visitors will more than make up for them. There are several interesting events in August, though really no one needs an excuse to visit Amsterdam in summer. There are outdoor cafes set up all over the city, and quite a few of the Amsterdam coffee shops even have tables set up out front, so in addition to all the famous indoor activities you’ve got plenty to see and do outdoors as well.

De Parade – One of Amsterdam’s favorite recent traditions is this 17-day event that takes over Martin Luther Kingpark, which is about 4 km south of Centraal Station and easily reached by tram or metro. The atmosphere at De Parade in Amsterdam is sort of a twisted traveling show combined with a Renaissance Fair. The shows and performances start at 3pm and go until midnight or 1am each night. Many are in English, or at least Dutch isn’t required to enjoy them, so this event is suitable for tourists. Children are welcome during the afternoon portions and things get a bit more adult as the night goes on. The 2009 dates are July 31 to August 16 and it’s €6 for general admission.
>>more information on De Parade Amsterdam

Amsterdam gay pride weekend and canal parade – This is the annual highlight on the gay Amsterdam calendar and is considered by many to be the best pride event in all of Europe. The first Saturday in August brings the famous Amsterdam Pride Canal Parade with around 80 boats floating along the Prinsengracht for around 250,000 spectators – most them, straight. Friday and Saturday nights during this weekend are filled with street parties and club events, and there is also a closing party on Sunday afternoon. The events are centered in the districts of Amsterdam where the gay bars, clubs, and hotels are concentrated, so this special weekend really shouldn’t scare anyone away who might not be interested in attending the parties themselves. 2009 dates are July 26 through August 2, with the canal parade on August 1 starting at 2pm.
Amsterdam Pride website

Landjuweel – In the village of Ruigoord on the outskirts of Amsterdam, they hold an annual 4-day arts festival where the residents of this squatted settlement and likeminded outsiders come together in the name of peace and environmentalism and such. This has more than a little in common with Christiania in Copenhagen, so expect plenty of counter-culture types. The village is about 8 km west of the city center, and is reachable on public transportation. The highlight centers around a midnight parade on the night of the full moon. The 2009 dates are August 6 through 9 with the full moon on August 6.
Landjuweel Festival website

Hartjesdag (Heart Day) – Third weekend in August – This annual cross-dressing festival has historic origins and was revived in Amsterdam in 1999. There are certainly gay and lesbian participants, but anyone who wants to take a go at cross-dressing is welcome at this event that is centered in the Red Light District area.

Uitmarkt – Last weekend in August – Just before the “cultural season” reopens for the year, this weekend serves as a free preview for singers, dance, theater groups, and anyone else who might fit on a stage. The biggest events are in Leidseplein, Museumplein, and the Nieuwmarkt area next to the Red Light District. There are outdoor performances and booths selling and promoting things all over on this very popular and crowded weekend in the city. The 2009 dates are August 28-30.

Summer in Amsterdam is generally pleasant, but never scorching, and often even a bit gloomy. It can be sunny and wonderful most of August, or it can be gray and drizzly just as easily. The highest temperature ever recorded in the city is 93°F/33°C and it happened in August, but heat in that range is very rare indeed.

With any luck you can get by in t-shirts, shorts and sandals during the day, but it’s wise to pack a light jacket because most evenings are quite cool.

Finding a cheap flight to Amsterdam in August is never easy. Airfares are still at their summer peak for transatlantic flights, and people flying themselves all over Europe during the month makes the situation even more difficult, especially at the beginning and end of August. Fare sales do pop up for this period once in a while, but they tend to be announced in late June or July, so it’s a gamble, and one that usually backfires if you are waiting on prices to actually drop before you buy.

Unsurprisingly, the hostels in Amsterdam are quite jammed all month, and they are at their peak summer rates of course too. The best advice is to book early since hostels tend not to have flexible pricing and many of them do sell out early. The Amsterdam hotel scene during August can be challenging as well. Most budget hotels tend to be full and at their peak prices, but since this is a very slow month in the business community it’s possible to find a 3-star or a 4-star hotel that has a special going. It’s definitely worth looking a bit up-market for deals before you book a basic place.