Of the three main hotel districts in Amsterdam, Rembrandtplein is a stand out in a few important ways. It is generally much nicer than the area around Centraal Station, and the location is central to virtually everything of interest to visitors of Amsterdam. It’s also not quite as far out as the Leidseplein area, which also has lots to offer. 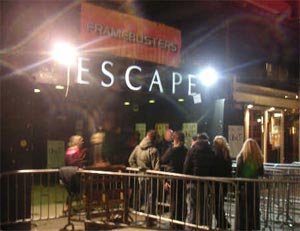 Rembrandtplein (plein means “square” or “plaza” in Dutch, so this is Rembrandt Square) is about a 15-minute walk from Centraal Station itself, but it’s a world away from that mostly-gritty area with the Red Light District at its heart. Among other things, this is where the most glamorous nightlife in Amsterdam is centered. And during warm months the square itself fills with wicker furniture for al fresco dining and drinking at the restaurants and cafés that rim the square. This is the best place in Amsterdam to enjoy Europe’s café culture.

There are a couple of notable Amsterdam nightclubs out in the Leidseplein area, but most of the fancier discos and clubs are either facing Rembrandtplein itself, or on the small streets just off the square. The Escape Club has long been a fixture on the party scene, and about a dozen other places keep it company in this area, trading places for which is the hottest at any given moment. Two notable concentrations of gay clubs are just off Rembrandtplein, but in open-minded and accepting Amsterdam, the scenes mix together in a friendly way.

There are only a few hotels on the square itself, but within a few hundred meters in any direction there are many, many more. When searching Amsterdam hotel listings you’ll find loads of establishments that boast about their closeness to Rembrandtplein, and any of them that are within a 5-minute walk or so will share a great overall location, even if they are spread around the district a bit.

Hotels in the area range from mid-price up to 5-stars. The fact that this generally excludes the ultra-budget travelers can be a great thing for those wanting a nice area that isn’t crammed with screaming backpackers all night. But speaking of noise, the square itself is loud well past midnight every weekend and pretty much every night in summer. If you are booking into a hotel that faces the square and noise is an issue, make sure you request a room facing the back.

If you will only be in Amsterdam for one night you might be best off staying near Centraal Station for the convenience, but for two nights and up you’ll find that Rembrandtplein is the most central area in the city. The popular sights are spread out from the train station area with a high concentration near Leidseplein, and all of them are a fairly short walk from this key area in the center.

And if this sounds good to you, but you are in Amsterdam to party in addition to seeing the famous sights, you need not worry. Mixed in with the fancy discos and restaurants on the square are a few rowdy sports bars and quite a few of Amsterdam’s famous “coffeeshops.” You’ll never need to go more than a few blocks to find anything you want in this neighborhood, but most of the hotel rooms are on quiet side streets, so you get the best of both worlds.

Reasons to stay near Rembrandtplein: