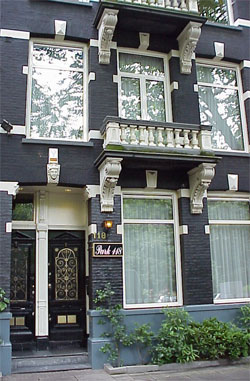 Prostitution in Amsterdam takes on several different forms, the most famous of which is the girls behind the windows in the Red Light District. While this is the only form of prostitution that 99% of Amsterdam tourists will notice during their stay, this public mating ritual is only one of four methods visitors have available to them.

Sex clubs – These tend to be a combination of a bar and a brothel, and they can range from small to quite large, and from dumpy to very fancy. They’ll usually charge customers between €150 and €200 for one hour with a girl in a private room, but there is a big problem attached. Just as is the case in other cities with taxis and strip clubs, these sex clubs in Amsterdam have a system whereby taxi drivers can add monstrous commissions (around €75) for bringing new customers to these sex clubs. Of course, you end up paying that commission as part of your fee, so arriving by some method other than having a taxi driver drop you right in front is recommended, but in some cases even that won’t save you the extra charge.

Escort services – Just as is true in most of the Western world, there are outcall escort agencies in Amsterdam that will send a girl to your hotel or apartment. One difference from most other places is that here it’s legal. To see that many of these women are very attractive you might want to check out Amsterdamlogue’s 12 hottest escorts in Amsterdam list.

Private houses – These small brothels throughout the country are known as privéhuizen in Dutch, and a privehuis when referring to a single “private house.” They don’t have bars like the sex clubs, but most of them will serve you a drink of your choice in the lounge area or later in your room.

For anyone who’s interested in getting off but doesn’t want to negotiate on the sidewalk of a crowded tourist district, or get caught up in some elaborate scam in one of the sex clubs, the private houses serve as a welcome option. They offer the utmost in privacy, discretion, and comfort, and at prices that are usually actually lower than in the Red Light District itself.

How the private-house brothels work

These places are generally in residential areas and usually a converted house or large apartment. The front door is usually only indicated by a small and discreet sign and perhaps symbols of the credit cards they accept on the window. You buzz or knock to get in and a hostess will greet you alone and lead you into a small and comfortable room where you’ll be seated alone. A main part of their business is doing everything they can so customers will never see each other, which is very different from the sex club experience.

Some places actually have a menu with a price list of various options and their costs, and if so you’ll be shown that shortly after you arrive. After you tell the hostess what you are after she will then leave to round up all the available girls, who will, one by one, come in the room and introduce themselves. At most of the brothels there are between 5 and 10 girls working at a time, but of course this depends on the day of the week and the time of day. It’s important to remember the name of the one you prefer because after they each come and go the hostess will come back to ask which girl you’d like. If none struck your fancy you can leave and you won’t pay anything, but if you found one appealing you’ll ask for her. She will then meet you and take you to a private room that has freshly cleaned sheets on the bed.

There will usually be either a shower or a bath attached to the room, and not surprisingly a room with a bath will usually cost more. The hour (or half hour) will begin by her asking you to wash up a bit, and if you are lucky she’ll join you in the shower or tub. After everyone is clean and ready you’ll typically be treated to a full body massage, which could use up the rest of the first half hour. You can cut the massage short or skip it if you prefer, but this is the most common way to build up to later fun.

Most people pay for an hour and if they are finished the act early on they still can hang around and enjoy the girl’s company. Depending on the girl and the house you might be able to talk her into another go round if you are ready, or at least some other form of stimulation on her part to take care of you a second time in an hour. This part is negotiable and varies from place to place and girl to girl. You won’t be rushed out of the room no matter what though, as long as you’ve paid for your time there.

As your prepaid time is running out you might be asked if you’d like to extend it by paying more right then. Many people recommend first timers start with only half an hour and then leave the option of buying more time because many people feel a bit uncomfortable on their first trip to a brothel and at least this way you aren’t committing to more than you are ready for. If you’ve paid for a full hour and then decide the girl isn’t the one you want or you aren’t able to perform yourself then you aren’t eligible for a refund.

Before your time is up you’ll need to get dressed and ready again, and this is on part of your time. Some places will tell you where you stand with the hour, and others will just let the time go and then tell you how much you owe at the end, so make sure you ask in advance or don’t lose too much track of time.

On your way out the girl or the hostess will usually make sure the lounge area and hallways are free of other customers, so you can usually just slink back outside without ever seeing another soul aside from the hostess and the girls themselves.

Prices at the private-house brothels 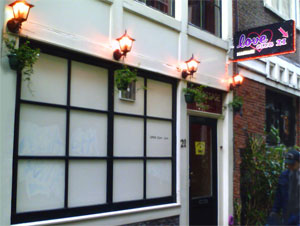 Some might find it surprising that this classy and pressure-free experience is actually (sort of) cheaper than the window girls in the Red Light District. In the RLD you’ll normally get what they call a “suck and fuck” for a standard €50, but this lasts only 15-20 minutes on a small bed and usually includes nothing more than you’ve distinctly agreed to beforehand. At the private house brothels the usual hourly charge is €80 for a full hour, or €55 for half an hour, and this includes everything normal, although a bath (and sometimes even a shower) will cost from €10 to €40 extra. If you have special desires that some girls might object to (and they often will object) then that will cost extra if they agree, but aside from that it’s all-inclusive.

Some experienced customers recommend tipping extra at the beginning to make sure the girl is ready to play, and others recommend tipping at the end to make a good impression if you plan on returning. Tipping in general is optional though, so if you don’t tip you won’t get any attitude, at least not at the better places.

Payment can be made in cash or credit card, although with credit cards you can expect an extra fee of around 10% on top of the price.

How to find the private house brothels

There are many of these places throughout Amsterdam, and some are far more famous than others. Only one of the better known private house brothels is actually in the Red Light District, and it’s really more of a Thai massage place with extra services available.

Here are some of the better ones that people often recommend:

This private house is near the far end of Vondelpark and is considered one of the classier brothels in Amsterdam. They have a pretty good website if you can read Dutch (or use a translator), which even has photos of the place and some of the girls (no faces though).

Overtoom 443
Phone: 020-618-9110
Hours: 10am to 1am Sundays through Wednesdays, and until 2am Thursdays through Saturdays
“Happy hour” from 8pm to 10pm on Wednesdays
Official Amsterdam Prive website

Asmara is about one kilometer out of the city center, and not near anything you’ve ever heard of. It’s probably best to take a taxi here or tram 12, 13, or 14, which will take you to 100 meters of the door. Their helpful website says they have 31 girls on staff, and includes sexy photos of some of them. Prices at this one start at €130, but that includes everything, even drinks.

This brothel is in a residential neighborhood south of the far end of Vondelpark, so you are best off taking a taxi or a tram to get here. They don’t have a website, and previous clients generally give the place good reviews.

Jan Bik is also listed on the Amsterdam sex clubs page because they offer duel service at their location not far from Centraal Station. There is a public bar area here where customers can mingle with each other, and the available girls, while deciding on a partner, but there is also the option of going to a private room where the girls will come through one at a time introducing themselves, exactly as in the other private-house brothels. A 30-minute session goes for €50 and a 60-minute session goes for €75, so this is the cheapest of the sex clubs, and among the cheapest of the brothels as well. Their own website even admits that you “won’t find Playboy models here” but they also promise a full hour of pleasant sex with nice ladies that provide GFE (girlfriend experience), which is something you won’t get in the Red Light District for anywhere near that price. Jan Bik also does not pay those extortionist taxi commissions that most sex clubs do, so if you try to come here in a cab the driver will probably tell you it’s terrible, or closed, or burned down or something. Fortunately, it’s walking distance from most parts of the city center (see the map below), or you can come in a tram, or just insist to a cab driver to take you here in spite of their protests.

This place is considered quite plain and basic compared to some of the other private house brothels, but it’s in the Red Light District so it does okay. This is more of a Thai massage place that guarantees a happy ending for an additional fee. All of the girls here are Thai or something very close, so if that’s your thing this is a good option. Their website doesn’t have photos, but it does actually have a price list.

Park 118 is not far past the Heineken Brewery and the AlbertCuyp street market. It is actually part of a small brothel chain that is well regarded in the Netherlands, at least by many past clients. It’s supposedly quite nice and relaxed inside, and a few photos on their website confirm that, although the site is in Dutch and even when you translate it there isn’t much information.

Hopefully by now you have a good idea of how things work, but you probably have more questions so we recommend checking out the great Amsterdam forums at ignatzmice.com. The site is an excellent resource for the Amsterdam sex scene plus other Amsterdam topics. Regular members help newcomers with their questions and it’s all quite civilized and worth a look.

Interactive map of these private-house brothels

Click on a blue marker to find out which brothel it’s pointing at.