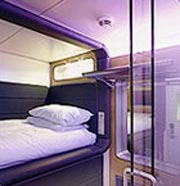 If you thought capsule hotels were only for drunken Japanese salarymen who’ve missed the last train back to the Tokyo suburbs, you were right, but things are changing. A British company called Yotel has already opened one capsule hotel in London at Gatwick Airport, and another will open soon at Heathrow’s Terminal 4. But the exciting news here is that in early 2008 they are opening a 56-cabin Yotel at Schiphol Airport so those flying into Amsterdam have another option.

Okay, so they aren’t exactly capsules, they are bigger, but they are the next best thing for claustrophobia-free travelers who want a room at the airport. Unlike Toyko’s capsule hotels, these cabins aren’t the size of a large coffin and they aren’t stacked like lockers at a bus station. Screw those capsules anyway. I’m known for throwing lavish parties in my hotel rooms that make the events P. Diddy gives feel like a day at Auschwitz in comparison, and it would be hard to fit more than 2 or 3 strippers in those real Japanese-style capsules. And that’s not even including all the so-called VIPs that always seem to turn up at my parties uninvited (and yes, I’m referring to you, Angelina and Brad).

At the Amsterdam Yotel they have “premium cabins” with a double bed and are about the size of a typically small London hotel room at 107 square feet (10 square meters). The Yotel will also offer “standard cabins” which wedge a single bed into about as much space as you’d find in the back of a campervan, or around 75 square feet (7 square meters).

Prices at the London Yotels start at about €35 for four hours or €77 for 24 hours in the standard cabins, which sound insanely high to me for a closet-size room. On the other hand, they all have TVs, free internet, room service, and bathrooms which promise 4-star luxury. I’m guessing their target market is business travelers rather than those of us cheapskates who like to minimize the amount of time we mingle with the weirdos that hang around in airports.

Even more interesting is the fact that the Amsterdam Yotel will be located beyond passport control (in other words, deep inside the airport) so travelers with an early flight out of Schiphol can check in the night before and sleep up until just before their flight is ready to board. This might be especially good news for the hundreds or thousands of travelers who have bizarrely long layovers at Schiphol every week.

Looks like the Amsterdam Layover Guide will have a new option, but this one is probably better suited to Greek shipping magnates and people using stolen credit cards. I can only hope the prices at the Amsterdam Yotel aren’t as outrageous as the London locations. They probably won’t be because everything is overpriced in London. I once bought a single aspirin there in a nightclub and it cost me about $20. At least I think it was aspirin because it sure as hell wasn’t what the guy who sold it to me said it was.