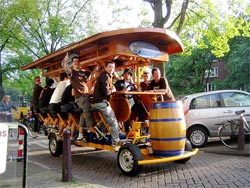 One thing about Amsterdam that is slightly unusual compared to most other great European cities, is that you can have a meaningful visit in only two days. You certainly won’t be able to do everything, but you’ll be able to check out many of the major sites and you’ll be able to leave knowing that you got a good feeling for the place. Pretty much everything visitors are really interested in is located in the compact city center, and as long as the weather is decent and you have good shoes you can probably do it all on foot as well.

If you are one of the many who are doing a quick Amsterdam trip either as a stand-alone weekend or as part of a longer tour of Europe, you’ll be happy to know that the major sites and activities are pretty easy to summarize. Throughout this site we discuss many topics in great depth, so there’s no shortage of possibilities if you’ve got more time on your hands, but if you want to know the major choices that can be conquered in 48 hours or so, you may find the suggestions below useful.

By the way, if you are organizing an all-blokes event, you might want to instead look at our Amsterdam stag weekend guide, and forget about these museums and such.

Rijksmuseum – This giant and incredible museum is undergoing a major renovation that will last until 2012 or so, but most of the famous works are displayed in a special collection that remains open to visitors through the entire project. You could see most of this smaller version of the museum in an hour or so, and it’s very worthwhile if you are interested in classic Dutch art at all.

>>more information on the Amsterdam Rijksmuseum

Van Gogh Museum – This smaller modern museum is just across the square from the Rijksmuseum, and it might be even more popular, mostly due to name recognition. If you like the works of Van Gogh, this is a must, but if you aren’t a big fan you might want to skip this one.

Anne Frank House – The attic where Anne and her family hid from Nazis is well displayed within this museum that also features things related to intolerance and whatnot. It’s kind of dry, but especially if you’ve read the book this is worthwhile. Lines here get long, so go early in the day if you can manage.

Heineken Experience – The former brewery has been a major Amsterdam tourist attraction for a couple decades now. In summer 2008 it’s reopening with a new and improved tour that will definitely include a couple glasses of delicious Heineken amid various multimedia displays.

>>more information on the Heineken Experience

Hash, Marijuana, and Hemp Museum – In the Red Light District you’ll find the world’s only museum that is solely dedicated to cannabis and its uses. The museum itself is probably best only for potheads, but visiting is fun and it can be more rewarding than most people realize.
>>more information on the Hash, Marihuana, and Hemp Museum in Amsterdam

Vondelpark – Especially during summer, this huge park near the museums is a great place to spend an hour or two at least. You might want to rent a bike and cruise around for a while, or you can check out some of the many free performances and other attractions within the park. 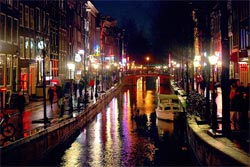 This city has a huge following among museum and art fans, and also among people who come to town to enjoy some things that aren’t legal or available in most other places. There’s definitely a big crossover among people who like to see a few museums and then hang out in coffeeshops, so don’t think you can’t mix and match.

Live sex shows – There are 3 theaters/clubs in the Red Light District where you can watch sexy shows, with two of them including actual couples doing it as part of the routine. Needless to say, these places are extremely popular among stag/bachelor parties, and also among hen/bachelorette parties.

Prostitution – Prostitution in Amsterdam is completely legal and regulated as well, so it’s fairly safe and surprisingly cheap as well. In addition to the Red Light District prostitutes, there are also brothels, and sex clubs, which are similar in many ways, and about 120 Amsterdam escort services as well.

Canal tours – Sure, it sounds corny, but ask nearly anyone who’s spent a lot of time in Amsterdam what is the first thing you should do when you arrive and they’ll probably suggest these one-hour canal cruises. You can find them just outside of Centraal Station, and several other places as well, and they are an excellent way to get oriented and see a lot in a short time, especially if you are just in for two days.

Just like every other major city, Amsterdam has a scheme where you can buy a pass for many attractions and public transportation all in one. The IAmsterdam Card isn’t really cheap, but it might be a good deal for someone coming for 48 hours or so. The fact that you can skip most ticket-buying lines and not have to worry about public transportation tickets either can make it worthwhile for a short trip, even if you don’t save a ton of money.

>>more information on the IAmsterdam Card