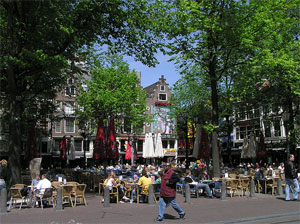 July continues to be the height of the tourist season in Amsterdam. In Italy and some other southern countries, the cities half empty during July and August as all the locals head to beaches and elsewhere, but in Amsterdam you never really get that feeling. Many locals do take the entire month of August off, but most of the big office blocks are outside the city center anyway, so the city still seems jammed with tourists and those serving them. There are virtually no July events in Amsterdam, but that’s probably just as well with the massive crowds you’ll likely encounter without anything special going on.

Sadly, there are no major worthwhile events to report for this month. In the past there has been a hippie festival called Landjuweel that takes place in the village of Ruigoord about 10km outside of the city, but it’s in August during 2009 and quite possibly in future years as well.

Actually, the famous and popular Amsterdam Pride weekend festivities start on July 26 in 2009, though the big weekend events are on August 1 and 2, with the Canal Pride Parade taking place on August 1 starting at 2pm. See Amsterdam in August for more details.

But fret not, because there will be no shortage of things to do during July. The lines at the major museums like the Rijksmuseum, the Van Gogh Museum, and the Anne Frank House will be long this month, so buying advance tickets online or going early in the day is recommended unless you want to spend 2 hours waiting out front for each place. If things stay on schedule the Heineken Experience should reopen sometime in June of 2008 after yet another refurbishment.

Amsterdam’s famous Vondelpark will be crowded all month and it has events on its main stage at least 4 days per week, but you can also experience the outdoors at nearly every one of the city’s restaurants and cafes. Al fresco dining is extremely popular here during the summer, and the places in Rembrandtplein and Leidseplein get especially busy. This is the perfect time of year to rent a bike for a long cruise outside the city or just around town.

There are also loads of concerts in Amsterdam, and if you check the schedule in advance you can buy tickets for some great shows online before you arrive. Many visitors coming to the city are curious about the coffee shops in Amsterdam, so especially during summer they have a lot of first-time customers who want to see what they are like. If you are considering this you might be interested in the Amsterdam coffee shops FAQ, which should explain everything you need to know about how and what to order.

You can see by the above temperatures that Amsterdam weather tends not to get blazing hot, even in summer. At least during July you can probably leave the jacket at home, but sometimes the evenings are quite cool so having a sweater/jumper might be wise. The highest temperature ever recorded in Amsterdam during July is 90°F/32°C and the lowest is 39°F/3°C, though generally it stays in the comfortable in-between pocket. It does rain during summer, but it tends to be light and unpredictable.

Unfortunately this is peak season for Amsterdam airfare and your only tool available is to book early. But even then, if you are coming from North America you are going to have to pay top dollar because fare sales are rare and there are no good tricks for this time of year. Coming from elsewhere in Europe it’s not quite as bad, and generally booking early is your best hope there as well.

Where to stay in July

Again, sad news, because this is absolute peak season for all the hotels and hostels in Amsterdam. With the hostels you often have to book early just to get a bed at some of the more famous places like the Flying Pig or Bob’s Youth Hostel, but there are quite a few less-famous ones that should have beds available if you don’t wait too long. For hotels you do have a chance at a little bit of a break at some of the business-oriented places. Some 3 and 4-star hotels will actually have lower prices during certain weeks in July since this isn’t a big season for trade fairs and such. If you are looking for a 1 or 2-star hotel you might scan some of the 3-star places because it’s possible they’ll actually be cheaper if you get lucky with the timing. Be careful about location when doing this though, because many of the business hotels are outside the city center, and not well situated for tourists.