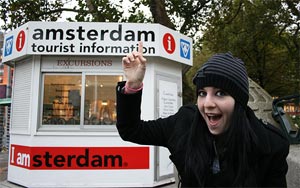 On a recent morning when I was admiring the panoramic view from the private rooftop lounge/day-spa above the penthouse in the Amsterdamlogue Building, one of the newer gals from the Amsterdamlogue secretarial pool introduced herself and asked if I could help her come up with an itinerary for a long weekend Amsterdam trip she wanted to take with one of her girlfriends. My first thoughts were, “Where the hell are the security guards?” and “I wonder if those guys will ever get their taser guns back?”

But I took another sip of my champagne coolie and decided to help her. I find it sexy when beautiful women call each other their “girlfriends” so I thought I’d put together an itinerary for a perfect 4-day weekend trip to Amsterdam for them. Here goes:

Quick search for airfare to Amsterdam:

For some strange reason, airfare to Amsterdam is insanely low right now, at least for flights leaving in February. I just found that for the dates I plugged in, leaving Wednesday, February 20 and returning Monday, February 25, the lowest fare from Portland, Oregon is $517, although flights with slightly more convenient times are $524.

You can find free maps when you get to Amsterdam, but I like to look at guidebooks and maps long before I get there, so I recommend downloading a copy of this mini Amsterdam travel guide in pdf form, which includes a few decent maps. I would also start downloading copies of the Amsterdam Weekly, which is the excellent English-language entertainment and culture magazine that has really good concert listings, among other things.

The flight leaves Portland in the early afternoon on Wednesday and arrives in Amsterdam at noon on Thursday. For instructions on getting from the airport into the city you can look either on the Schiphol Airport page or the Amsterdam Layover Guide page. For €3.60 each, you’ll be at Centraal Station in 20 minutes or so.

After arriving at Centraal Station, it’s about a 15-minute walk to the Rembrandt Square Hotel, which has twin rooms available for $38 per person per night over that weekend. This is a budget hotel with an excellent location, but for those who prefer more comfort and amenities, there are plenty of other hotels in Amsterdam from which to choose.

Quick search for other hotels in Amsterdam:

After a short nap in the room, we’ll walk around the city a bit and then head out to the Leidseplein district for the rest of the evening. Before the sun sets, stop off at the Tops Coffeeshop on Prinsengracht, which has a great sound system and the nicest view of the nicest canal of all Amsterdam coffeeshops. After dark we’ll head to De Rokerij Coffeeshop, which is probably the best coffeeshop in the whole city, and it’s right in between all the restaurants of Leidseplein. We’ll have a late dinner of rijsttaffel, which is the Indonesian personal buffet that is the best thing you’ll ever eat in Amsterdam.

To end the evening we’ll hit one of the many nightclubs in the Rembrandtplein area. The scene is different every night, so the best thing is usually just to walk around and listen to the music coming out of each place before deciding.

For simplicity’s sake, we’ll buy an iAmsterdam Card for €33 for 24 hours. With this card we’ll get free transportation on the trams and buses in the city, but more importantly we’ll get free admission to most of the city’s museums, and a few other things as well. First stop is a one-hour canal cruise, which is included with the iAmsterdam Card, so we’ve saved €10 already.

After the canal cruise, we’ll take a quick look at the modern art museum called the Stedelijk, which is temporarily located next to Centraal Station. On the way to the Stedelijk, we’ll stop off for a cappuccino at the Baba Coffeeshop on Warmeostraat in the Red Light District, since they play nice trance music from morning until after midnight. The Stedelijk is easier to appreciate after a trip to any coffeeshop, but Baba is especially nice.

After the Stedelijk, we’ll take a tram ride back out to Museum Square near the Leidseplein area. We’ll skip the lines and head right into the Rijksmuseum and then into the Van Gogh Museum. I don’t like to dwell in these impressive museums. I seem to have the ability to appreciate art at high speed, which gets easier if you drop some of the pretentious attitudes that many people bring with them into museums.

In the evening we’ll go to the Boom Chicago show right on Leidseplein. I’ve never been to this show, but people say it’s really good and the IAmsterdam Card gives us 25% off so it’s better to do it on this day. After the show we’ll go back to De Rokerij again to help get the proper motivation for the 15-minute walk back to our hotel.

It’s Saturday and we’ve already done most of our cultural stuff, but a late-morning trip to the Anne Frank House is not a bad idea. It’s not included with the IAmsterdam Card, which is why we didn’t do it the day before. We’d normally do the Heineken Experience instead, but that is closed for renovations again until June. Don’t forget that the Heineken Brewery was there even when Anne Frank and her family were in hiding, so it’s actually more historic than the Anne Frank House. It’s important to keep things like this in perspective.

After the Anne Frank House we’ll check out the awesome flea market at Waterlooplein, which is just 2 short blocks from our hotel. After the flea market we’ll take a short walk back into the Red Light District for a wild Saturday night. Catch one of the happy hours at the bars along Warmeostraat, and then head into the Hill Street Blues Coffeeshop for a lovely view of the canal out back.

Then we’ll do a self-guided pub-crawl through some of the many bars in the Red Light District, and after that we’ll grab a bite at the FEBO automat in the area, or perhaps a huge cone of those delicious Amsterdam French Fries.

Sundays are kind of dead in Amsterdam, but more and more of the stores along Kalverstraat are open so we’ll take a stroll through there. The Dampkring Coffeeshop is just off the Spui area at the end of Kalverstraat, so we’ll spend a decent chunk of the day there.

As mid-afternoon approaches, we’ll walk a few blocks to the entrance to the Jordaan neighborhood. This is a residential district that is jammed with art galleries, but also loads of small restaurants and bars. We’ll have a mellow evening over there with a nice dinner and a few drinks at some places where it’s otherwise all locals.

Walk back to Centraal Station for an early-morning train ride to the airport. A couple hours later we are on the plane back home.